A former natural scientist, David Morley has published 18 books, including nine volumes of poetry, won 13 literary awards and gained two awards for his teaching, including a National Teaching Fellowship. He is Director of the Warwick Writing Programme at the University of Warwick, and also Director of The Warwick Prize for Writing. Recent publications include The Invisible Kings (Carcanet, 2007) and The Cambridge Introduction to Creative Writing. His forthcoming collection of poems from Carcanet will be titled Enchantment. 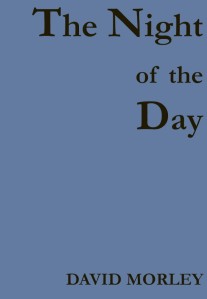 The Night of the Day (Nine Arches Press, 2009) is remarkable for the skill and grace with which it travels through the difficult territories that map a journey from darkness towards light. In this movement from out of the shadows, it engages with tricks of the light, vanishings, illusions, magic and bitter realities, whilst using the terrain of language that each necessitates.

From the brutally austere language that depicts a child’s experience of violence that opens this short collection, the poems move thematically into the natural world and the darting, shifting vocabularies of memory, friendship and loss. The Night of the Day keeps a solid and determined pace, which ultimately brings us under the canvas of the big top and into the lives of the travelling circus people, in their own words, their own voices, an undertow of threat and prejudice forever shadowing their footsteps on the road.

I am trying to behave but my father
has a fist crammed with kitchen knives
like a brilliant new hand, and the rest
of us in the house are suddenly not alive.
One of us is guilty of the crime of two biscuits.
One of us has taken biscuits without permission
so all are condemned and have earned his lesson
which is to cower in the bedroom’s corner
without cover while he slices our arteries open
in the air between us. His house is his abattoir.
His home is lit with hooks and steel hands.
We are not alive as he bars the bedroom door.

The morning is ordinary because I am three.
My brother unwinds a lace from his shoe.
He works its little rope across the hearth
until it makes a dripping strip of light and flame
that he slips slowly on the back of my hand.
I am trying to behave as though this never happened,
keeping my scorched hand below the tablecloth
while my father, sick with guilt, serves us soup.
My brother knows I can soak up his secrets.
My left fingers misbehave and my father
forces the hand. Sered sores. A veal of veins.
My brother at this time is being flung into a wall
and all I am thinking is that I do not like oxtail.

I do not like the blood thirst of what I can hear
through the floor of my bedroom as my father
flies off his handle again, but this is a real handle
that he’s handling as a weapon, and the sitting room
is being smashed and smashed and smashed to death.
Better the mirrors, I think, than my mother.
But he’s upstairs by now, kicking his way up
and dread is draining through that black wall
but the wall doesn’t shelter, not when there’s a door
to be hurled off its hinges like it was never there,
him yanking me by my cock to his yelling height
before dropping me down a well in that dark room.
His face swells to fill the door as he finds his range.

Published in The Night of the Day (Nine Arches Press, 2009) and previously published in Cake.

Order The Night of the Day here.

Read two poems from The Night of the Day – ‘Mayflies’ and ‘Alaskan Salmon’ – in Horizon Review’s third issue.

1 thought on “David Morley’s The Night of the Day”