Steve Spence lives in Plymouth and co-organises live poetry group The Language Club. His reviews and poetry have appeared in Great Works, Shearsman, Stride, Tears in the Fence, Tenth Muse and The Rialto. He was assistant editor of Terrible Work magazine for four issues and in 2007 completed an MA in Creative Writing at the University of Plymouth. His debut book, A Curious Shipwreck (Shearsman, 2010), was shortlisted for the Forward Prize for Best First Collection. 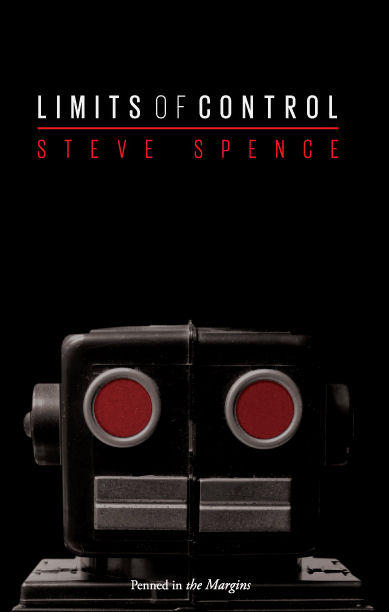 In this extraordinary sequence of prose poems, coral reefs fall from the sky, volcanoes smoulder and pirates come to power in Britain. Combining montage techniques with reckless interventions, Steve Spence mashes up the worlds of robotics, banking, fishing, optometry, entomology, climate change, speech synthesis and meteorology to create a dizzingly contemporary poetics – and a new form of nonsense. As entertaining as it is politically engaged, Limits of Control (Penned in the Margins, 2011) speaks to the challenging predicament we find ourselves in: ‘Things cannot go on as if nothing has happened yet the events which follow are even more strange.’

Voices of the dead

Knowing how to feel is more important than what you feel.
This surely depends less on the robots than on the quality of
the humans who design them. Should beauty be painted with
her head in the clouds? She still has occasional mood swings
but they’re nowhere near as severe. From the water everything
looks different yet most learning happens casually and without
programmed instruction. A system of uncertainty has entered
our daily lives. Pollack like a slow-moving bait and for that
reason the action of your rubber eel is important. As mutinies
go this is a very laid-back affair. Some scientists say that our
planet is running out of platinum. This may or may not be
true but every cloud has its moment in the sun. During the manic
phase there can be feelings of inflated self-esteem verging on
grandiosity. Do you have the ability to spot the next big thing?

Whether it was actual bravery that kept him
there or extraordinary arrogance is open to
some debate. “Ask Nigel how ‘industrious’
sounds,” she said. It’s all very vigorous and
virile yet this thin-lipped variety has sturdier
jaws and more teeth. What are the roots of
altruism? “We’ll end with a pepper but we’re
going to begin with porn.” He emerges here
as a global softie with no time for oppression
and all the time in the world for the oppressed.
Lavish eating and drinking was a key element
of the Roman world yet even now the city
seems incapable of self-regulation. This causes
an intense acoustic ripple to propagate across
the plane of the surface.

Join Penned in the Margins to celebrate the launch of two new collections:

Limits of Control
by Steve Spence

Love / All That / & OK
by Emily Critchley

with readings from Emily and Steve, plus Chris McCabe and
Sophie Mayer