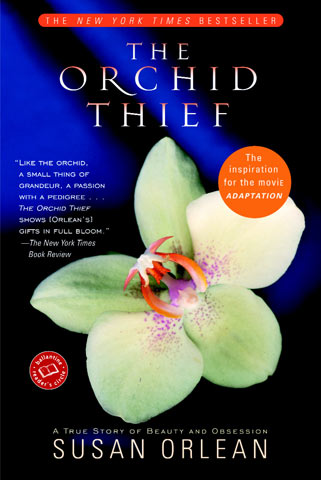 I’ve only read a few chapters but I’m pretty sure that if you loved John Berendt’s Midnight in the Garden of Good and Evil (as I did), you’ll love Susan Orlean’s The Orchid Thief (Vintage, 2000).

It was a New York Times bestseller, a Barnes and Noble Discover book, a Borders New Voices selection and the subject of the movie, Adaptation. It promises to live up to its reputation.

The back cover reads: “The Fakahatchee Strand, Florida, once a vast swamp awash with indigenous orchids, was plundered during the orchid boom of the 1890s. Its remaining plants, now fiercely protected by law, still attract the unwelcome attentions of thieves. John Laroche is one such self-confessed and convicted thief. Intrigued by newspaper reports of his trial, Susan Orlean followed Laroche on an enthralling exploration into the eccentric world of the obsessive orchid collectors; a subsculture of aristocrats, enthusiasts and smugglers whose passion for plants is all-consuming.”

“Sometimes this kind of story turns out to be something more, some glimpse of life that expands like those Japanese paper balls you drop in water and then after a moment they bloom into flowers, and the flower is so marvelous that you can’t believe there was a time when all you saw in front of you was a paper ball and a glass of water.”

“It is a collision of things you would never expect fo find together in one place – condominiums and panthers and raw woods and hypermarkets and Monkey Jungles and strip malls and superhighways and groves of carnivorous plants and theme parks and royal palms and hibiscus trees and those hot swamps with acres and acres that no one has ever even seen – all toasting together under the same sunny vault of Florida sky.”


Read more about The Orchid Thief at Susan’s website.