Ryan Van Winkle is Reader in Residence at the Scottish Poetry Library. He runs a monthly “Literary Cabaret” called The Golden Hour and is an Editor at Forest Publications. He lives in Edinburgh but was born and spent most of his life in America. His work has appeared in New Writing Scotland, The American Poetry Review, AGNI, Northwords Now and The Oxford Poets series. He has won Salt’s Crashaw Prize and been shortlisted for the Bridport and Ver Poetry Prizes. 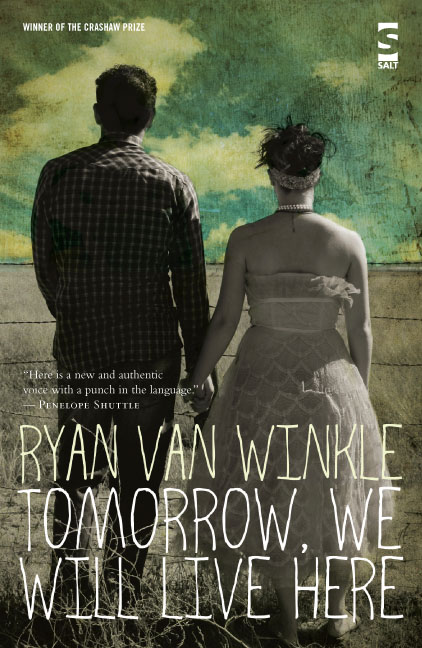 “This is a terse, tough début by an award-winning American poet with punch in the language. What you find here is the grist of life – death, love, sex, departure – honed by a voice obsessed with the gravity, fear and the humour of being human. Van Winkle’s understated, plain spoken narrators are as diverse as the America they live in – the lonely night nurse, the conflicted son of a preacher, and the cross-country runner – are all ill at ease in the world. Through road kill, September 11th, and death row they address their own bitter faults with noir-like melancholy, seeking redemption and absolution.”

“This luminous collection begins with the workings of the author’s ghost and ends on a bar stool contemplation of days lived and quietly lost. In between is all the richness and wonder of things.”


“RVW’s poems are rooted in the detail of daily lives and personal histories, yet their richly sensual physical reality is like ice, glittering beautifully over a void. His speakers are distinctly ill at ease in the world, questioning the sense of it all in voices that combine an elegiac tone with off-beat humour. VW’s first collection marks him as a confident and compelling new voice.”


“There is a bracing tension at the heart of Ryan Van Winkle’s first full collection, Tomorrow, We will Live Here. On the one hand, there are often ironic and self-aware poems whose focus is on geographical and personal fluidity – born in the USA (a Springsteen fan!), Van Winkle now lives in Edinburgh – and, on the other, those which explore, in a number of first person narratives, those whose lives are determined by inheritance and circumstance in the land he has left behind. In poems, like ‘They Tore the Bridge Down a Year Later’ (about a childhood rape) and ‘Everybody Always Talking About Jesus’, speakers recount memories that haunt them, as they seek forgetfulness or redemption. The filmic clarity of Van Winkle’s narrative shows they will be granted neither. These are thrilling poems in a confident and rich collection.”


“The experience of exile haunts these poems, as speakers reach helplessly towards forever-lost pasts and glimpsed, impossible futures. The wide and empty landscapes of America are stalked by ghosts and silences, suicides and roadkill. Words go unsaid; the old family life is unreachable because “They do not know the time in my zone”. Even death is ambivalent: is it a longed-for escape, or yet another numbing failure of intimacy?

Ryan Van Winkle’s back-country lyricism is tinged with cross-cultural influences – the beat-up resignation of Springsteen’s smalltown USA, the teabags and toast of bedsit Britain – that come together in a distinctive and harmonious poetry of distance and loss.”


sits up with me when the power cuts,
tells about the trout at Unkee’s Lake,

the wood house burned on the hill.
He says he was intimate with every

leaf of grass. Wore one hat
for Griswold, another for his own field,

the possiblities of the century laid out;
an endless string of fishing pools. But

they never got ahead of my ghost—
he took them like cows, one at a time,

never lusted for the color of trout
in a pool a mile away.

He knew from the smoke in the sky
Mrs. Johnson was starting supper, and, in March,

when the candles appeared,
he knew Bobby’s boy had died.

My ghost only ever had one bar
where the keeper didn’t water his drinks,

nor did he feel the need to hide his moth cap,
his potato clothes, or scrub himself birth pink.

My ghost tells me there was a time you’d look out
and not find a Dairy Queen. You could sit

on your porch a whole life and never think
about China. Sometimes I see my ghost

bringing cut sunflowers to his wife
and it seems so simple.

Then, sometimes, it is dark,
he’s just in from work and Griswold says

they ain’t going to raise his pay. And even back then
the power went out, long nights when they had no kerosene.

And my ghost tries to sell me on simpler times:
the grass soft, endless—


And the mother with scarlet baby biting
her breast, and the trucker with the bullet whore, crying

though he’d like to do more. And the newlyweds
too poor to go too far—but still he brings crimson,

and the nurse escapes, blots her mascara
on paper sheets which dry an ink spill,

and the farmer sweats the night
and goes back to grass the next day,

and the male too scared to shit,
waits for the balloons to break.

And only yesterday I was told
of my grandmother below hospice sheets,

And someone looked out this window,
and someone spilled wine for the floor

and you have to tell yourself without fear
where this goes, and what we leave,

what remains whenever
we are a little bit gone. And how many

beneath whispering sheets,
wiped their ghosts on white before sleep?


She is a god of knots.
His socks are Spanish Bows
and in the night the doors
are secured with a tight Sheep Shank,

china cups hang on Artillery Loops
and she twists her own hair
when she worries, pulls it
over and around and then through

and around again until it hangs
in a Jury Mast and some nights,
when the door is tight, she gets him
in a Carrick Bend and whispers

about the old Bill Hitch
and all the time he hopes
she’s tied herself up
enough to stay the storm.


We had one of those
conversations like necessary
astronomy which your mind
must get back to
again and again to tell you something
about who you are and how you exist.
In your mind
maybe you are Paul Newman eating eggs,
maybe you are Orion tightening his belt,
maybe we are,
all of us, still 23 and drinking
as if we were stars who could drink
and not burn
out what was between us.
And it is important that we never fuck;
not on that night
or ever and after, anyway, we
lost touch, but that night was something
that I come back to
like a constellation an uncle showed me
and if you die
before me, Erin, I will not go to your funeral
and try to make
my mouth give everyone that image of you
in December,
our heads touching, your cuts
like all the skies we loved, opening
and closing and opening
again, echoes of necessary people chatting,
organizing lights
inside a darkness that grows and disperses
in the sky outside.

Ode for a Rain from Death Row


The rain is a cold, clean prayer,
the only light I want to see.
I say it still rains on her

like it rains on the bars and streets
somewhere outside the walls.
And in the rain, she is always twenty,

her shoes always candy-red Converse,
her jeans always damped to her thighs,
her mouth never parted from mine.

She hasn’t pressed her lips to glass
since the fire; the ashes are back to ashes, the dust
follows dust, the spring rain powders her arms

and evaporates in the stare of the sun.
And this rain is the only light I want to see.
A mist that kisses till my socks are sponge,

till the fire fizzles and baby is back again
cooing with hot-chocolate-warm hands.
Before I die I want to stand outside,

birth-naked, let the Lord soak me.
But options and pardons are gone.
The priest only offers a glass

where my throat wants a holy rain that pours
in sheets and hoods and lasts for forty days,
till it floods, and floats my sins away.

Order Tomorrow, We Will Live Here.

1 thought on “Tomorrow, We Will Live Here”