Andrew Philip was born in Aberdeen in 1975 and grew up near Falkirk. His first full collection of poetry, The Ambulance Box (Salt, 2009), was shortlisted for the Aldeburgh First Collection Prize, the Seamus Heaney Centre Prize for Poetry and in the Scottish Book Awards. His work has been published in the United Kingdom, the United States of America and Ireland, translated into Italian and included in anthologies such as The Forward Book of Poetry 2010, The Best British Poetry 2011 and Adventures in Form. He is poetry editor at Freight Books, Scots language editor at Irish Pages and a popular online tutor for the Poetry School. 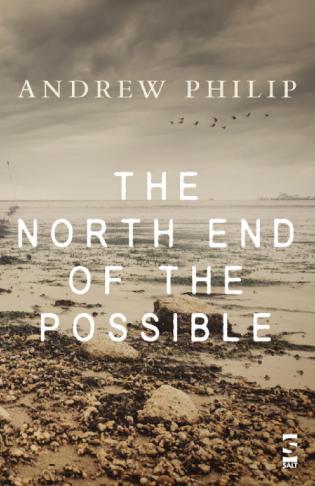 “How do isolation, belonging and the land shape us? What difference does this make to how we live? Andrew Philip’s second collection delves deep into these and other questions.

In the opening and closing portions of the book, Philip takes us further into the life of MacAdam — an enigmatic character from his multi-award nominated debut, The Ambulance Box. MacAdam, who seems to have built a version of the Large Hadron Collider in his garden shed, attempts to find “the fundamental particle of night”. We follow him into the chaos that results, as his experiments run out of control, culminating in a powerful encounter with a mysterious intruder.

The middle of the collection brings us poems of place, love and politics. A newsreader’s BBC English transmogrifies into Scots without her realising. Edinburgh’s worst piper is lambasted in a rollicking Burns pastiche that led novelist Rodge Glass to dub Philip his “new favourite poet”. And an intricate, tender sequence charts the highs and lows of a decade of marriage.

Rich in humour, imaginative reach and formal invention, The North End of the Possible displays a fresh strength in narrative writing for Philip and pushes his lyric gifts to new heights.”

“Andrew Philip has great formal skill, high ambition, and a lyric voice strong and supple enough to explore scientific and theological ideas, and to make tender and beautiful love poems. The promise he showed in The Ambulance Box is amply delivered in The North End of the Possible.”

“This is a real gem of a collection – it’s witty, wide-ranging, deft, funny, adroit and moving, but most of all, wonderfully, wonderfully readable. A book that takes us straight to the heart of the matter, and the matter of the heart. Paul Farley described the great poem as a ‘page stopper’ and with Philip’s The North End of the Possible I constantly found myself going back to read through poems again for the sheer enjoyment of their craftsmanship and music.”

“Craving to show anger turned into comedy, love wry and without vanity, and pain that shan’t lead to anger or bitterness, Philip describes this world; as if were a trial, at times in desperation for the next. A daily round, chancing (without control of the process), sometimes on the between spaces – of banter, longing for the departed, and hallucinatory language play.”

A Child’s Garden of Physics (1)


Trauchled by the paraphernalia
of a life spent tinkering
— the long stands, the mundae hammers —
MacAdam settles

enough mirk in this world
to account for the breadth of black
he thinks must lie
at the core of everything.

And here it is, nestling
in the pleasant land of Counterfact,
spreading as the sun droops:
the fundamental particle of night.

It shades in/out of being
the way MacAdam does when not
observing himself at a distance,
his anchor ego flowing

the hour has flung at him
gather in the corner of his shed.
Now, armed with the tools
to measure the mirk aright,

he can take to the streets
to ascertain precisely what
the afterlight is made of — this
could be his service to us all.

MacAdam Takes to the Sea


Unhooked from its tenter, the sea drifts off
to arrive at a new understanding
with the earth
while MacAdam, wearied
and clean out of Red Bull,
walks to the edge
of the land he’s always called home.

Pure force of habit, that locution:
he has come
to feel more at home on the move these days —
on the move and in the dark.

Aye, but there’s dark
and dark the dawn has marvelled at.
It’s hidden from him yet, but MacAdam
must drive through such a gloom
to witness how
lightly the morning rises from its knees.
For now,
we leave him wading
waist deep into the loosened waves.


Snow bound and determined to break
out of the silence enforced by chronic fatigue,
Jarrett is at his piano again — the first time
in let’s not contemplate how long for a man
as given to his art as this — stripping
the music back to all that ever mattered,
taking it to heart the way you’d want
her to take what you know most sparing:
your softest, most unguarded speech and touch —
no smoke, no mirrors, no sleight of hand,
no firecracker runs or full-voltage solo virtuosics:
just the tune; the tune and Christmas coming.
A moment to warm the fingers. Press RECORD.

Cheer Friend of Both
An abnominal for Dietrich Bonhoeffer


Thorn in the Reich, be the torch
for the terrified bride

of the torn Herrn. Interned,
confined, be free in the other

hidden Reich, the one eterne.
If the dirt of the Hof be

Ich hoffe not trite: no richer effort
to render the terror inert. Brief

the trot to Tod. Therefore, brother,
be fortified, cheered, enriched.

to intent. Tend the bidden boon.
If it be no Hilfe, do not ochone;

ochone for the Eiche, the Erde,
the bent Hirte. No introit intoned, be

the Brot bitten: be rid of, interred.
Thorn in the Reich, be reborn.


from The North End of the Possible (Salt Publishing, 2013).

Order The North End of the Possible.

Read the Scots glossary for The North End of the Possible. 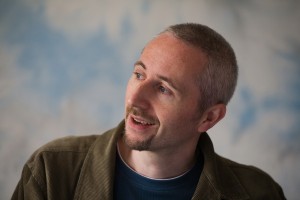 Andrew Philip was born in Aberdeen in 1975. He lived in Berlin for a short spell in the 1990s before studying linguistics at Edinburgh University. The Ambulance Box, his first book of poems, is published by Salt. It was shortlisted for the first book category in the 2010 Scottish Arts Council Book of the Year Awards and for the 2009 Aldeburgh First Collection Prize. 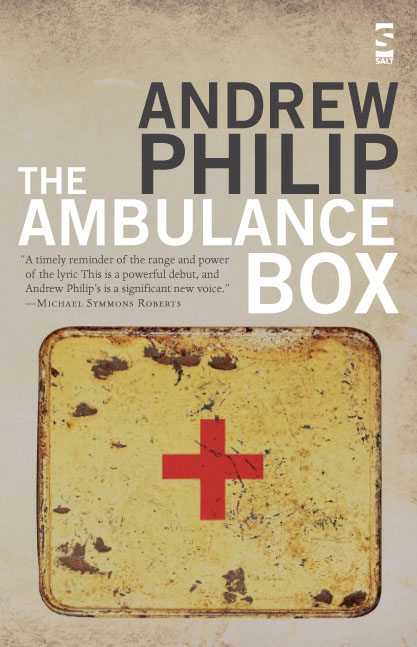 “The Ambulance Box is a timely reminder of the range and power of the lyric. This is a powerful debut, and Andrew Philip’s is a significant new voice.”


“Andrew Philip is part of a significant group of younger Scottish poets. This is poetry which achieves its ambitions nimbly and without fuss. In doing so it talks, quietly but urgently, to us all.”


“It is rare to encounter a voice of this kind in which a burnished clarity of utterance seems the only conceivable response to life experienced as a profound yet daily miracle.”


“‘This dove is here for the duration.’ With precision and delicacy, Andrew Philip explores what it means to live by faith in a ruptured world.”


“The Ambulance Box delights readers with a dance through images and words that express powerful visionary and and spiritual experiences … [and] encourage us to explore the visual and linguistic connections that link art with faith and uncertainty; art with loss and discovery; and art with the artist.”


The Invention of Zero
Andrew Philip

where nothing was not—
no neat ring

shackling us to absence,
no way not

to count or be counted—
where everything

filled without this
empty nest of a number

perched in the mind,
everything swerved

its wide white oblivion;
and could we,

given the state of our knowledge,
live with the lack of it

in the wild, the exhaustion
of our reserves,

the number and intensity
of cries in the night?

this is the man you fathered —
his voided love, his writhen pride and grief


Order The Ambulance Box from Salt.