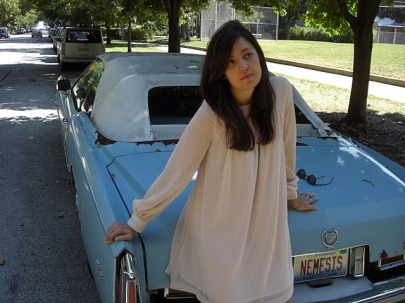 Catherine Theis is a poet and playwright living in Chicago. She spent her childhood summers in Sicily, where she swam in blue coves and ate gelato before dinner. Recent poems and plays have appeared in Another Chicago Magazine, Barrelhouse, CutBank, and 1913 a journal of forms. She is the recipient of an Individual Artists Fellowship from the Illinois Arts Council and is a graduate of the Iowa Writers’ Workshop. Her first book is called The Fraud of Good Sleep (Salt Publishing, 2011). 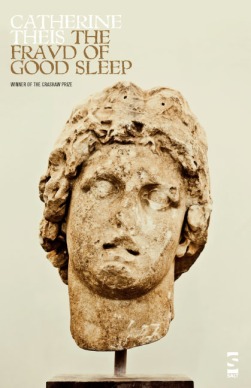 “The Fraud of Good Sleep is a book of “serious humanist” poems. Theis’s poems combine a stunning, classical rigor with a passionate madness that is utterly contemporary and surprising. Charting the magic arc of a modern love story on a banjo string or through birch-white epistles left behind at a deserted campsite, these poems engage in the oblivion of snow, intoxicants, and broken-heartedness since living includes loving where “destruction be our lot”. It’s a place where fortunes are told: “Degenerate fruit and burned apple wood./ The impure equals the fertile plain”. From prose poems and extended lyric sequences to translations and fragments, this book attempts to enfold the living past into the insane present. Or, what you might call “the wild hunt to baptize the dead”.

“With The Fraud of Good Sleep, Catherine Theis gives us poetry as sensuous, glinting energy. Swerving between the intimate and the adamant, these poems feel like letters written to you by someone who’s in love with the world—someone whose eyes and heart are wide open, who’s learned (and keeps learning) from the ancients, who can mingle her voice with Sappho’s and smile wickedly at Dante. There are musings on cities and foods (“Who will bring the chocolates weather permitting?”), mock lectures, disarming wisdom (“Fidelity, the sea we share in peaceful times”), and exhortations to live—to live well. “My concern”, writes Theis, “is with circumference, many-faceted/ crystal wine glasses, Roman aqueducts, all sorts/ of highway thinking”. These are poems flashing with wonder and humor, but “roughed in sorrow”, hard-won in their realizations. They are full of the bright ache of being alive.”

“Catherine Theis’s The Fraud of Good Sleep is a riotous and refined celebration of language. It is elegant and erudite without ever being stuffy, and surprising at every turn. A truly dashing collection, full of glitter, and everywhere intimating the “joy in the mountains very near”.


The ancients loved in a way that allowed
them to relay their delicate campaigns
across opposite seas, and so, we dutifully
diagram triangular examples well into
the night. Of course keeping my voice
present to itself throughout the duration of its
speech is no easy task. There are reactions:
the final problem not limited to missed steps
down a waterfall. It will be readily understood
that you come and go without the slightest
warning. Asleep in pinwheel cross-stitched
blankets, composer, composer, your hair,
uptorn tufts and silvery spokes, tells me
morning arrives again rough. The confirmation
and wait. Starched linen, your blue collared
shirt I can almost fold into a ship.

But it is God’s wish
to let live the cypress
where no one stood.

Who am I to judge
when we seem both
equally loved.

Upright pines
column our souls.
A flag of red

is all a hummingbird needs.
I know the pleasure
is in the speed.


Today giant icicles kept falling off the eaves of the house. Every time we heard the torso-thud shake the walls, my husband said, “You’re getting a boner, aren’t you?” When I finally found my other sock to put on, my foot cramped up as if to remind me there isn’t a moment in life when someone’s breath doesn’t smell like a sack of old potatoes.

If I had a house in Florida I would plan snorkeling trips for all my friends. If no one liked to snorkel, I would offer dinner instead, provided that there would be a lot of beer for me to drink while I fried fishcakes on the stove. We’d make a big to-do when we finally sat down at the table, washing out our wine glasses and lighting candles, anything to get out of actually sitting down (please, don’t look at me, not now). Then I’d have my husband parade out the grappa, which we’d all drink ceremoniously, talking mindlessly about our intended trips to Bassano or how beautiful Italia! is in September. I’d play the JAWS music in my head, over and over, until I formed the right question to ask.

Taking a red eye flight doesn’t have to end in exhaustion. A great deal can be accomplished the night before the flight. Adjustment of curtains, new buckle on a sandal strap, checks for outstanding debts. I have to remember to thank my travel agent. He’s a small-necked prick, and real nosey too. Doesn’t he realize I am a lady? What would he say if someone asked him about his eating preferences? Sometimes I wish I could smash his bird-like ribcage to smithereens, scatter the mullet shaped bones under all the telephone posts in town.

Last night I dreamt about Florida. I was hunting for baby sand dollars, which are illegal to take, in soft white mucous sand, all the while savoring how lucky I was to be on vacation and proud of my own true earned decadence. The light off the ocean blinded me.


The livery system works out here in the country.
We have use to polish the silverware, use to
restore empire embroidered chairs,
the coins in the fountain remain as they are,
the plumes remain, the walking trails are frequented
by our visitors but without much earthly care,
do you see from where I am approaching?
Come with me to France and drink from the vintner’s cup,
surely more than a gastronomic treat,
I will tell you of my pretty wife’s disposition
and her refusal to travel by aeroplane, lunch, or boat.
Can you ever say what holds your hand under
a woman’s skirt—perhaps I am the one
who need not be speaking, nevertheless,
time we have for whatever swampy middle
marsh the air prescribes because don’t you see
the condition of feeling lovely beside someone
translates into the way one is willing to drive
their motorcar straight into the face of a mountain?
For what? That the happiest moment is recognition.
The strawberries have been quite good this season,
more importantly, the chestnut trees have been in constant bloom
for you, and I cannot say when that has ever happened.


As brought up to be
skeptical, noncompliant,
brought to bask in the failure
or refusal to comply.
Pliancy is my own little flower
I refuse to call my own,
where on the battlefields I keep myself busy
trading tobacco, collecting the wounded,
administering myself to others because it is
Christmas Day no less, and the fog rising in boxy outlines
above boxed hedges so distracts me
for once I am not thinking about what kind
of material I’d like to be buried in.
Clementine elixir. Lots of fabulous shit happening.
Apologies, kind sir, apologies
for the way I acted the other night
when the moon was out of bounds.
Scrying out,
still the flower pinned to my lapel bloomed
and I was made to notice the carbon copy.
The priority of my death did not prevent me
from noticing this poem
in which I was permitted to succeed
if I ever wanted to. Aromatic solutions.
Ductile conditions.
Like the poem at the time of my death,
it’s believable.


The country’s manse requires a calmness
of mind, of method.
Pewter plates, tankards,
the dried firkins fitting comfortably
in the endnotes without disruption,
mummies wrapping themselves in parlance,
in abundant white cloth, how historical.
Here, drink this glass of milk, stay in bed,
do not think such strange thoughts,
do not think at all.
The cast-iron pan cast apart,
away from the mind’s deliberate action.
Holding things off,
as if one could be a butler or lady’s maid
to a very rich gentleman,
so estranged from a self-problem,
castellated. To be cast in metal,
to be a pellet disgorged
by a hawk’s decisive spirit.
Double-headed lights cast
through the darkness of night,
never carried inside you,
never broached, never recognized
as invoice or receipt of a city
made famous by its twilight.
Gold and silver. Birds nesting in the ivy,
voices resembling a tower,
their invisible faces, a cup’s worth
of goodwill chatter.
Water, smoke, lakeshore fogs & light now leaving—
new forms, new spaces, life’s materials
contributing to a structure
but not to sympathy,
the cupholder’s proof not measured
in finite steps, or as an ordering principle,
but roughed in sorrow
it sees its way through,
it passes into sense.
The skillful application of paint surprises you.
You suddenly realize you are not yourself.

Order The Fraud of Good Sleep.