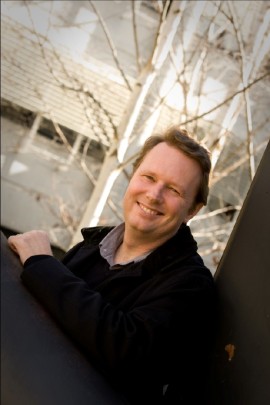 David McCooey’s first book of poems, Blister Pack, won the Mary Gilmore Award, and was short-listed for four other major Australian literary awards, including the NSW Premier’s Literary Awards. His chapbook of poems, Graphic, was published in 2010. Outside, his third collection has just been published by Salt Publishing.

He is the Deputy General Editor of the prize-winning Macquarie PEN Anthology of Australian Literature (2009), published internationally as The Literature of Australia (2009). He is also the author of a prize-winning critical work on Australian autobiography (Artful Histories, 1996/2009), and numerous book chapters, essays, poems and reviews published nationally and internationally in books, journals and newspapers. His audio poetry (original music, poetry and sound design) has been broadcast on ABC radio, as well as published in various literary journals. He is an associate professor in Literary Studies and Professional and Creative Writing at Deakin University, Victoria.

“Outside is the second full-length collection from the prize-winning poet David McCooey. Outside takes the most basic of categories – day and night, inside and outside – and makes them the source of powerful meditations on the strangeness of our diurnal lives. In the resonant landscapes of these poems, the domestic slides into the universal, the personal becomes the historical, and the cultural is the real. This is a deeply unified work, even as it encompasses reflections on such diverse topics as the number 5, hands, newborn infants, heaven, anger and rock music. The collection also features a number of major sequences, including ‘A Short Story of Night’, and an electrifying response to the films of Stanley Kubrick. The book is also finely balanced in another way: by a generous and unique sense of humour, demonstrated in the Dadaist and hilarious ‘Intermission’. Outside is always unsettling, but it is, too, always humane.”

“The poems take strength and originality from the way they combine opposites. On the one hand, studies of Kubrick films and animal slaughter, they are straightforwardly fierce; but they achieve their effects in a manner remarkably controlled and subtle.”

“David McCooey is one of the most controlled and attentive poets writing in Australia. Renowned as a critic as well as a poet, McCooey’s careful study of poetry is shown in his poems, but they never rely only on this learning and consideration of craft. This remarkable book almost liberates an aesthetic, and is in itelf a work of great beauty mixed with moments of biting satire. It’s the wit, the aphorisic turn just when it’s needed, both within the poems and within the timing of the book as a whole. McCooey has become entirely his own poet – genuinely good and essential. Read him.”

and tolerate the monotheistic sun
(that plants the crows’ feet near his eyes).

He sometimes feels that he has lived
a hundred years or more, that life’s become

a kind of sickness, and a single kiss would
drain the blood from his adamantine face.


He has taken himself away into
the wordless north, where days move

like seasons, and ice and snow are
clean of promises. From here the world

he has left behind begins to look like
one of God’s sins. He divines the greatest

iniquity: that, nameless, he should be
mistaken in name for his creator.


In my primitive childhood
the Cheynes Beach Whaling Station
in Frenchman Bay, just outside Albany,

was operational and open to tourists.
My memory gives up very little.
How, out of the dark ocean,

did they find the ocean-coloured bodies of
living whales to turn into pieces? What mysterious
industry was there to turn them into

those pieces? Flenser and Hookman
worked the blubber, while Saw Man and his
steam-driven saw cut the whales’ heads to pieces

small enough to fit into the cookers that
were worked by Digester Operator. It
took two men to straighten the harpoons.

Any ambergris found in a whale was sent
to Scotland for refining. But I don’t
remember any of this. I just remember that

as we watched from the distance, my father
or brother taking photographs, the vast smell
offered an unimaginable and unrelenting intimacy

of disgust. The equipment was not subtle,
though devious and effective enough. We could
not watch for long, though probably long enough to be

told that the whales’ oil, once refined, was used
for special purposes including cosmetics, fine
machinery, and watch mechanisms.

From the gift shop we bought
a piece of tooth which, now slightly
yellowed, sits in my parents’ bookcase.

The station then must have had about four
or five years left in it, closed down as it was
in 1978 by the rising cost of fuel oil.

An Essay on The Shining


A hotel is not a house.
The length of a corridor
is the length of a mirror halved.
A tricycle articulates
the uncanny difference
between floorboard and carpet.
The Steadicam is a nervous
energy, a kind of music.
The music is a kind of
violence. The violence—when it
comes—is a kind of intimation
of the real thing, like
the stilted dialogue, the
hysterical typewriter (first blue,
then white), and the shadow
of a helicopter on the car
in the film’s opening sequence
(with its synthesised Dies Irae).
The style of the blood
filling the lobby; the archly
symmetrical shots; the
characters caught in reflections;
the seduction of numerology—
all of these are realised
in a struggle with the sincerely
ugly: the drinking, the man
fixed in the labyrinth of his
rage, lost in the Indian
reservation of his long-forgotten
crimes. (The African-American
is also historically accurate).
What becomes of the boy,
we wonder, once we have safely
seen his father’s corpse, frozen
in the achromatic salt
of a pure, factitious snow.


Call out the doctor
and bid him to tell
the difference between
a dead woman and
one living.

Ask him what becomes
of the glittering masks
when we sleep.

Ask, too, if he
knows where his
children go to in
this ritual night.

Lastly, ask whether it is
the outside or the inside
that is beyond reckoning.

When he gets home
his wife will tell him.
There is one thing
between dreaming
and reality—fucking.


Hysterical animal banging
in the box of night that
your brain becomes.

Harm migrates across
the swampy distances
of your mouth.

Your body, merely grass
distorted by the wind
raking over a hill.

There is a script for
such chaos, though it
can never be remembered,

this occult confusion
that disguises
itself as clarity.


Blue twilight
is the heir of colour.

We are justified by love;
each day a room we home to.