Myra Connell’s latest collection of poems is the pamphlet From the Boat (Nine Arches Press, March 2010). Her first collection of poems, A Still Dark Kind of Work, was published by Heaventree Press in 2008. Her poems have appeared in various magazines, and her short stories in two collections from Tindal Street Press, Her Majesty and Are You She? She lives in Birmingham and has two grown-up sons. 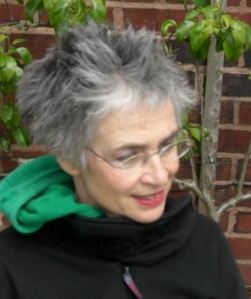 These poems ‘From the Boat’ come from a time of waiting, of mourning, and of finding small consolations. They are, many of them, small poems, the opposite of heroic. Bare, spare in mood, and exploring a sense of dislocation and disorientation, they look coldly at what is left when almost everything is pared away.

And yet they rejoice in moments of revelation – the golden flash of carp in a pool, a red jacket on a woman in a cafe; and the words, the language, the poems themselves, never feel doubtful or uncertain in their own power.

Myra Connell’s poetry is measured yet generous; experimental and adventurous; sharp, often angry, and yet tender.

And yes, the house
Myra Connell

And yes, the house, the houses.
The wood, the ground, the thick brown leaves –
not that we lay on them, not that,
but standing, felt our bodies skin to skin.
I loved a stranger in a sycamore wood –
and always, now, the house.

It was a white one, on a bank or hill.
Behind the hedge a lawn, but curving;
and steps up to a path. Such blank clean windows.
(What was it that he said? The hope was stupid.)
Such an ugly house, so cold,
so stiff, immaculate, so dark at dusk.
So dead.

From the valley
Myra Connell

From the valley, trees seemed frosted.
Up close, each twig a ghost, a shadow made of ice,
each twig, all along the ridge
and pushing in to sparse bare woods.

And did I say? About the pool?
He took my hand, said, Here.
This way, and led me round the back,
behind the crumbling wall –

an awkward turn, a stepping stone –
(the smell of frying eggs, stale smoke)
and there, a deep black pool.
Carp moved goldly,

Order From the Boat.

Matt Merritt mentions Myra Connell and From the Boat in this
Polyolbion post.