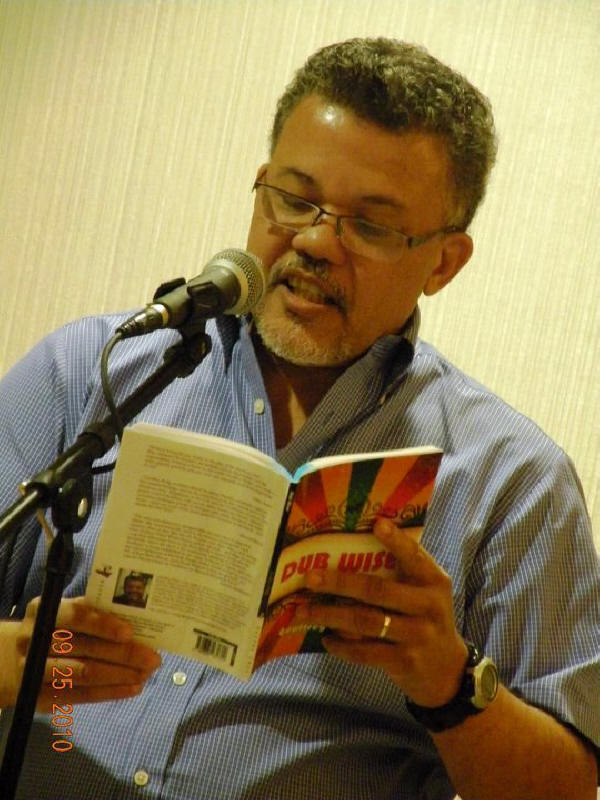 Geoffrey Philp is the author of ten books of poetry and fiction, including Dub Wise (Peepal Tree Press, 2010). Philp’s poems and short stories have also appeared in Asili, The Mississippi Review, The Caribbean Writer, Gulf Stream, The Apalachee Quarterly, Journal of Caribbean Studies, Florida in Poetry, The Oxford Book of Caribbean Short Stories, and most recently, Whispers from the Cotton Tree Root. He teaches English and creative writing at Miami Dade College where he is the chairperson of the College Prep. Department. Geoffrey has a popular Caribbean blog: http://geoffreyphilp.blogspot.com.

“Without losing the joy of play or the play of the rhythms, Dub Wise celebrates the burdens and delights of love, friendships and the responsibility of being at home in the world. Geoffrey Philp’s new book is witty, playful, gracious and, yes, wise. An enjoyable read from beginning to end.”


“Geoffrey Philp, in multicultural Southern Florida, sensitively explores his complex heritage, alert to the environment he has entered and to his Jamaican roots. Epiphanies in the U.S. and the Caribbean, sensuous love poems to his Colombian wife, poems about family, hurricanes, injustice and other challenges; poems in dialogue with myth, literature, the bible, music – these are some of the many graceful treasures in this book. Give thanks for Dub Wise.”


“The voice now distinctive, recognizable, the tone clear & clipped & ‘skitter’ [the ‘something like music’], the stanzas running into each separate other, as they shd, like the human voice does. Also a new strong sense of place (Third World Miami and its Spanish – and Kgn of course – esp from Mountain View to the Sea), family & history (welcome the Seminole). Above all, there is the continuing infolding of a ‘Jamaica Tradition’ as being established in the voices of Morris & Dawes, plus also the acknowledgment of McNeill, Baugh, Mikey Smith & Garvey, and the NL of Jean Binta Breeze. And Derek Walcott (where he grounds, in a way, the Morris-Dawes Ja Tradition) in ‘Beyond Mountain View’.

On those cold mornings when my daughter
shuttled between work and classes, she’d bury
her face in her sweater as her bus heaved a steady

sigh around the circle named for Chief Osceola,
who spent his final hours in a dry cell, dreaming
of the day when his people would remember

old stories that reminded them who they were
before the advent of musket and small pox,
before they learned words like “cannon”

and forgot their own names;
before he was betrayed by his own nobility,
for believing the war could ever end –

seeing friends when he should have counted enemies;
captured under a white flag,
whipped by the wind, like the scarves

of those old black men she saw along side
roads of Tallahassee, bent by work and promises,
like angels in the mist, stumbling home before first light.

After thunderstorms have cleared the city,
After the homeless have abandoned their cardboard palaces,

turns away from charted rivers,
slithers over the boulevard I could not cross

when the names Lozano and McDuffie rhymed
with necklaces of burning tires, and away

folded their arms while balseros floundered, boriquas
drowned, and neg joined their sisters and brothers

on the ocean bed. Yet something like music
rises from the sound of gull’s wings beating a path

over Calle Ocho, Little Haiti, La Sawacera, like bells
that echo over the Freedom Tower, bright as the final

burst of the sunset against billboards, gilding the sea
grapes’ leaves washed clean by evening rain.


A Poem for the Innocents

A killing moon peeks through leaves
of trumpet trees in full bloom
for Lent, their barks crisscrossed
by wild strokes of a machete
when my son tried to help me weed
our garden, overrun with dandelions,
branches, leaves, a bounty of seed
and thorns, side by side, under clusters
of suns bursting through the branches.

Shadows flicker across the wall upstairs,
over Buzz Lightyear’s grin, Mr. Potato
Head’s sigh, and under a map
dotted with cities that fill his dreams.

What promises will I make
when I climb the stairs
before he falls asleep to the noise
of the television with cluster
bombs blooming in the sky
over Baghdad? What comfort
can I give him as I draw the sheets
over his shoulders, kiss his forehead,
when he worries that if he closes his eyes,
his Aunt Batsheva, half a world away,
will not rise from her bed in Gan Yavne,
thirty-seven miles west of Ramah
where Rachel wept for her children
and refused to be comforted.

The map over his bed now frightens
him, and I cannot convince him,
despite the miles and miles of oceans
and deserts, that the machete
under his bed will not make him safer,
any more than the sacrifice of innocents
will save us, for he knows,
he knows, somewhere
between the Tigris and Euphrates,
a wave of steel races toward Babylon.

“And summer’s lease hath all too short a date.”
– Sonnet XVIII, William Shakespeare


When evening ambles down Flagler
to the tumble of closing cash registers,
mould of faded bills in the back
pocket of his blue, pin-striped suit,
she will go with him only as far
as the river to watch fishing
boats with their tail of terns and pelicans
flashing wings, like silver,
against glass vaults of Brickell.

But when night struts along Biscayne
with the rumble of reggae in his stride,
tabaco and mojitos on his breath,
desire tight around his waist,
she will lead him down the causeway
into cooling waters of the bay,
daily cares sliding off their flesh,
and her dark laughter, like waves,
lapping the sides of the Rickenbacker.

Ev’ry mornin’ me an de pickney
wake up from sleeping pon de col’
floor, an me haffi clean dem eye,
wipe way de matta, send dem
go school with jus a prayer
inna me heart
that so fassy-fassy now
is like smady close de door
inna me ches’, an lef me one
fe wall naked in de dus’.

Lawd, do, I know I shud tru’
only you, but dis plastic
is de one t’ing dat stan’
between me and certain deat’
an t’ings not looking
so good wid de acid bubblin’
up me throat an unda me tongue
an I wonderin’ even if I mek it,
how I gwine live?

As we descend Mountain View Avenue,
past houses that lie prone
beneath Wareika, scarred by hurricanes
and bulldozers, past walls
smeared with graffiti that still divide the city,
I roll up my window from the stench
of the sea at low tide that creeps
into storefronts and rum bars,
into the hair of sisters in floral
prints, shirts of brothers
with spliffs tucked behind their ears,
up the legs of children rolling
spokeless bicycle rims down a lane
still unchanged by my love,
and ready myself for the blinding blue
of the Caribbean Sea that shapes
the palisades of Kingston, shrubbed
by mangroves and sea grapes, round
the bend that in my childhood led
to Harbour View, away from my father’s
anger, as light flashes outside
my window, across my driver’s face
making even the bush beautiful.

Near the roundabout, our car joins
a line of holiday traffic heading
toward the airport, smell of the dead
harbour clinging to my body,
and a man, armed with a rake and machete,
clears debris from the embankments,
branches that block signs for travellers like me
who have forgotten which side of the road leads home.