John McCullough’s poetry has appeared in publications including London Magazine, The Guardian, The Rialto, Poetry London and Magma. He teaches creative writing at the Open University and the University of Sussex. His first collection is The Frost Fairs (Salt, 2011). 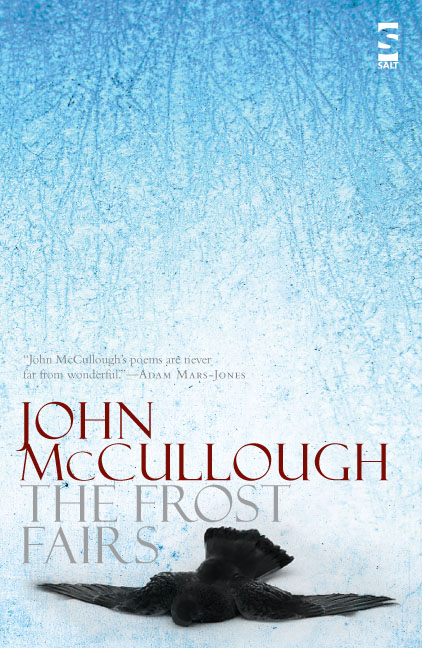 The Frost Fairs is a compassionate book with a global and historical scope, tackling science and city life from a range of surreal yet poignant angles. It explores love in many forms, from modern transatlantic relationships to hidden gay and cross-gendered lives from the past. The pieces travel from ancient Alexandria to twenty-first century bars and council estates, behind everything the vastness of the sea and sky. The array of voices here is striking: taxi drivers report their most outlandish fares and hermaphrodite statues flirt with observers; abandoned lovers watch frost fairs melting on the Thames and drag queens revel in the freedoms afforded by the Blitz.

Formally deft and carefully crafted, this diverse range of poems uses language that is always musical and alive. Surprise and the uncanny are cherished as ways of returning to us the strange leaps and enduring power of our deepest yearnings. In this collection, longing and losing condition all we see and hear, making the impossible suddenly plausible. Whether exploring Brighton seascapes or questions of empire, there is always in McCullough’s writing an openness to seeing the world from an alternative point of view. At once bold and haunting, The Frost Fairs opens the door to a new country in the reader’s imagination in its exploration of the possibilities of the human heart.

“In this immensely enjoyable collection there is an immediacy and tenderness that is outstanding. These vivid moving poems have such a sharp eye for those telling daily details, the particulars. All of this, plus their humour, creates poems that are so solidly tangible and believable. The title The Frost Fairs tells it all. The vulnerability and changeableness that threads our lives, the shifting ice below our feet.”

“John McCullough’s poems are never far from wonderful. He shows a lovely mixture of ease and energy, so that there’s a feeling of improvisation even in closed forms. Unpredictable, tender, resourceful – why shouldn’t Wallace Stevens hold hands with Tintin?”

“John McCullough is a poet for whom language is a flexible gift. He can be formal and controlled, colloquial and intimate, sensuous and saucy. He enjoys risk-taking in his work, forging unusual juxtapositions of images and ideas, and it’s this playfulness and humour which makes his work, like a stiff sea breeze suddenly hitting you in the face, so refreshing and invigorating.”

“I’ve been reading John McCullough’s poems for several years and never saw him as ‘promising’, rather, as a verbal magician who had already performed, with a sureness and brio anyone might envy. The startling range of subjects can be partly accounted for by his ability to enter the imaginations of personae from odd walks of life or curious moments in history. He is even able to work out what Michel Foucault’s spoons might have thought about their owner! In poem after poem one senses the encroachment of an exalted vision held at bay by this poet’s commitment to conversational tone and offhand irony. I don’t want to round up the usual superlatives, but I do urge you to read this landmark first volume.”

What sticks is the hum
of the fridge in your basement,
a plane ticket lying flat on one chair.
The way, fag in hand, you order me to stop smoking:
you’ll damage your cilia

and you conjure those tiny threads stroking together,
pushing wayward particles where they belong.
You drain a glass of vodka,
write my name in your diary on the page
where you’ll wake in a new country.

You keep your promise:
two hours and twenty dollars on a dodgy line
from a city without Marmite
where you tussle with silverfish
and baseball shirt slang.

O much assailed friend,
in these fathomless times
I walk down to the ocean at night
to set my hand on its skin
and my mind on rowing, rowing, rowing.

In humid months, at the estate’s unwatched edge,
the boys gather for an after-hours cigarette

with the engines of graffiti-tagged bangers.
Customized stereos thump out speed garage,

the race kicking off in a blizzard of chalk dust,
their bouncing charge towards a crooked iron post.

Death and dew ponds can’t stop them while they swerve
past quivering teasel, conquer the bone ridge’s turn,

skeins of wool lifting from gorse as banners
for the night’s whooping, fist-raising winners.

Further off, the crews unite for a slow drift, melt into hills
but leave the empty sky with headlamp trails:

The Disappearance of St Anthony’s Church

Hard to tell exactly when it vanished –
local rumour says late or early summer.
They stole the thing discreetly, brick by brick,
an anti-miracle. Curt officials blame
the village but no infidel’s been punished,
the two best clues a chisel by a tomb,
a distant maze of tyre marks from a truck –
though some insist that these came later.

They left behind foundations, one unwanted wall
and a different view of pines, the snaking river.
Next spring the first grass sprouted in the nave,
the chancel’s earth disturbed only by lovers
and the odd partridge hunting for snails
or a place to rest in silence for a while.

There will be readings by John and guest poet Lisa Handy.

There will be readings by John and guest poet Sophie Mayer, author of The Private Parts of Girls (Salt, 2011).