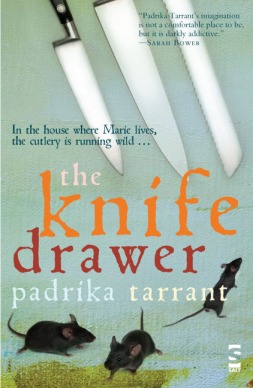 
I had looked at The Knife Drawer several times in our local bookshop, as it is a very desirable looking thing, but I had been somewhat put off by the blurb which describes it as “a darkly comic tale” and by the fact that someone had described it to me as fantasy – I admit to being unfairly prejudiced against both genres despite having read very good examples of both! However last year I was lucky enough to hear Padrika Tarrant read at a local event, and it was her mesmerising reading that compelled me to buy the book. I needn’t have worried though, this is inspiring writing from the outset. I was so completely drawn into Tarrant’s sinister make-believe world that I forgot that what I was reading was fantasy.

It is hard to review a book like this without giving too much away about the plot. But I will say that it starts with a dead body, and so begins our stay with a hugely dysfunctional little family that has very little contact with the outside world. If you can suspend belief that no one from social services or at least a health visitor would have been sent round to check on the children, then you can fully immerse yourself in their odd and uncomfortably insular world. There is an overlap here between fantasy and reality. There probably are families that are this weird in real life, but there are other elements of the book that are definitely in the fantastical realm. Fantasy verging on reality is the most apt description that I can think of and this is what gives it its edge – that coupled with Tarrant’s surreal and completely original imagination. Fiction demands a higher level of believability than poetry – or maybe it is that the writer has to work harder to sustain the world and ideas that they are creating over three hundred pages or so, and this is where I find some fantasy writers lacking. Tarrant however has pulled this off seemingly effortlessly – to convince a sceptic like me that mice can save babies and that cutlery can come to life is no tall order (except in poetry), but convinced I was.

This is a story of obsession, favouritism, and a world in which the animals garner far greater sympathy from the reader than the humans. It is a story of many voices: not all of them human. A story of family, dysfunction and how we can endure in the direst of circumstances (that makes it sound like a misery memoir, which it most definitely is not). It involves mice and people and birds and cutlery. It exposes the weaknesses of the human condition in all its awful glory. And yet despite the story’s darkness and moments of horror there are enduring bonds of love and kinship and a spark of hope that shines through everything.

If I was a psychoanalyst I might be slightly worried about Tarrant’s psyche; as a critic I think she is a literary genius and I am very much hoping that there is more work to come. Tarrant is definitely a creative force to be reckoned with. The Knife Drawer is an example of magical realism at its finest (and darkest). There are few, if any, endearing characters in this book – so don’t pick it up if what you want is a light cheery read or a happy ever after ending. It is, however, a perfect example of how fantasy can be literary. This is bright, fresh, intelligent, imaginative, painterly poetic writing that left me reeling. If you have any aspirations as a writer yourself you will probably find yourself wondering as I did where on earth these ideas come from and wishing you could come up with something so original yourself. One thing is for sure – I will never look at cutlery in the same light again.

The book is imbued with mysticism. It intertwines a fairy tale surrealism with modern life concerns in a slightly unhinged yet enthralling way. You can’t help but be sucked into the disturbing world that Tarrant has created. There were moments where I wanted to throttle some of her characters, or at least give them a good shake. But such is the power of her writing that if something did befall one them I was immediately both horrified and saddened. The technical quality of the writing is superb – the content may appear mad at times but Tarrant retains a masterful control of her subject matter and her words. This is a very well written novel, and I could not fault her writing (although it was let down slightly by a couple of typos and a mistitled chapter that had escaped the copy editor’s eye). Her language is vivid and poetic:

The sunrise flickers against the sky in shades of gore as the night is eaten away, scavenged clean by the circling rooks.  The light is painful against window and roof-tile, for if there was any scrap of mercy in this old cold earth, the sun would not have risen again. (p337)


There were hints of other writers too, whether intentionally or not: Kafka, Hesse, Lessing, Murakami, and other influences were at play too – Tarrant is a fan of the animator Jan Svankmajer and his dark humour’s influence is very evident here. It also put me in mind of some of the more surreal modern poets – Simic, Popa, Ivory and perhaps Petit.

Even after close reading I am a little unsure whether this is just an excellent, slightly warped, highly imaginative work of art or if there is some bigger philosophical message that Tarrant is trying to convey, perhaps a metaphor for family life and modern times. It is also a fantastic analogy of organised religion. What I am convinced of is that it is a work of a wholly original mind. I have certainly never read anything remotely like it and fully expect never to read anything like it again. I would urge you (yes urge you!) to read it for yourself.

Padrika Tarrant was born in 1974. Emerging blinking from an honours degree in sculpture, she found herself unhealthily fixated with scissors and the animator Jan Svankmajer. She won an Arts Council Escalator award in 2005 and has been working more seriously since then. The Knife Drawer is her second full length book; Broken Things, a collection of shorts, was published by Salt (2007). Padrika quite likes sushi, although she tends to pick the fish out. She hates the smell of money. 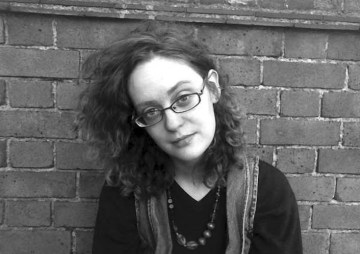 Julia Webb is a graduate of the University of East Anglia’s Creative Writing MA. She has been published in journals such as Other Poetry and Poetry News, she has been shortlisted in several major competitions and her prose poem ‘Lent’ was the winner of the 2011 National Poetry Society Stanza Competition. Julia teaches creative writing and writes reviews for Ink, Sweat and Tears.