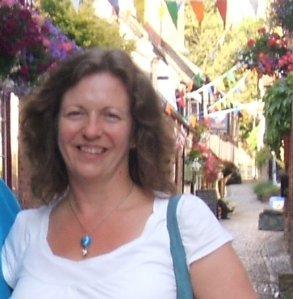 Victoria Field is a writer and poetry therapist based in Cornwall, United Kingdom. She has two poetry collections, Olga’s Dreams and Many Waters – the latter based on a one year writing residency at Truro Cathedral. Her latest publication is a pamphlet in collaboration with Penelope Shuttle and Caroline Carver, October Guests. Her third co-edited book on therapeutic writing is due from Jessica Kingsley Press in November 2010. She is an Associate Artist of Hall for Cornwall who have produced two of her plays.


Centuries ago, someone’s father thumbed an acorn,
still cradled in its cupule, into the yielding earth,
to be part of a Cornish hedge undulating over fields
in time to the tides below. Now, you stand alone,
trunk hollow as old bone, tip-toe on phalanges
of roots, tilting on the hillside, gateway between worlds.

When I open you, Tree of Doors, men come rushing
towards me, holy and worldly. (The secret name
of the oak tree is father). You’re sacred in every forest,
grove and garden of the world, branches grasping
sky-god Jupiter, thunder-god, Thor. Here, earthed Druids,
Men of Oak, love moss and damp, this milky sun and you.

Mistletoe is the divine touching your trunk, turning planks
to boats, connecting Cornwall to the sea-kingdoms
of the setting west. St Columba prays to the wind like a gull
in his oak-built chapel. St Brendan strengthens his coracle
with oak and, God-tossed by waves, conjures New Worlds.
Emperors, victorious in Rome wear crowns of your leaves.

Like any father, you stand like a God in the field
so thunder touches you first, lightening thuds through you.
Like any daughter, I suffer too. Are they your long fingers
grasping the ground? Bysow hir ow talhenna an dor…
Or my own, half-wood, half-bone? I’m thirsty for roots.
Syhes, syhes rag gwreydh. And I close you, my Tree of Doors.


The high bracken is full of spirits – its prehistoric
scent takes me home to childhood in Kent,
blackberrying, beating back the sap-filled stems

to reach brambles no one else can be bothered with,
fearing, and longing to see, the deft flick of an adder.
The spirits of that village are here now,

clear as day in the island light that’s half sky,
half water – Nanny, old Nunc, Mrs Noakes
and Mr Palmer, Mr and Mrs Monk, those girls –

Michelle and Maureen – none living now –
(not as the mainland understands living), but present
in these dense acres of green where I’m lost,

surrounded by sea, not knowing
where I’m going – nor quite where I’ve been.

Willows never forget how it feels to be young.
William Stafford


A single rowing boat moves slowly through
the silted shallows of a river once welcoming
ships of the world. Your name was a byword for tin
and abundance – now the guidebook calls you

‘much decayed’, a place for walking old dogs,
antique shops and early closing. How
does it feel when history has harvested
the best of you – to be a basket of memories

too long for the living? All around, willows bend,
graceful in their sleepy fullness. Lazy ripples
fade away. Nothing is ever as it was –
these passing ghosts, my sad, reflected face

in stilling waters and, on my fingers,
the unexpected tang of salt.

Trebah is a sub-tropical garden in Cornwall, situated on the
Helford estuary. On 1st June 1944, a regiment of 7,500 men
of the 29 US Infantry Division embarked from Trebah Beach
for the D-Day assault on Omaha Beach in Normandy, where
they suffered grievous casualties.

all my days these days are blind days, the moon’s
face, blank and white, looks in from time to time –

the same shade of grey in this country
of the dead. Winters never end in the garden

where everyone’s blind, standing stock-still
on our shallow roots each side of the valley,

aching for spring. None of us speak though
we hear signs of life – voices of people and birds,

distant hum of boats and planes, wind
stroking the leaves. They tell me I’m naked

from the Monterey pine, let them fall heavy as slate,
cold as old armour from tanks rumbling down

nothing moves in me now – no sap rises, no leaves fall,
no swinging branch to lift then drop a child down

to where things might go better – as we wanted them
to in nineteen forty four. Then, sunshine pulled desire

up from my roots, my leaves quivered and rose.
Girls of Cornwall bloomed all around, opened

to the young oaks of soldiers so full of promise,
responding with beauty – their thighs pink and silken

as spring magnolias, they flounced lip-sticked and frilled,
filled with the red lust of sudden rhododendrons –

until those goodbyes when hundreds of handkerchiefs
from a tree full of ghosts dropped sodden into the grass.

One uniformed man, tall as a pine, mysterious
as an ash tree in March, was mindful of memory.

my skin, sharing the pain of being here now, then,
a year soon only trees will remember, before running

from the enclosed garden of innocence, down to the sea
crossing to another world, one of lolling heads,

soft and open as toads in bamboo, tight knuckled
as bone on old branches – and beyond, furnaces

where people burn easy as seasoned wood,
jungles where, like the sudden death of a million

healthy oaks, men fall under the blows of those
who love cherry blossom. I don’t need to be told

not to sow for three days at the beginning of March –
I’m limbless, silent, scarred, dead from the neck up.

All my days are blind days. I can’t see the sun nor feel
on my branches the blood red of a passing robin’s breast.

In five years, we had just two, true conversations.
The first expansive, outside in sunshine, marriage

on both our minds – we were wedding guests
on a perfect May day, everyone joyful, dressed up,

bubbling with mild hysteria. You acknowledged
a wistfulness, too, for those of us not, or not yet,

(and, now, never can be) – happily spliced.
At least that’s what I read between your easy banter

and serious discussion of churches and religion – like me,
you seemed on the edge – half in half out

but yearning too, wanting to know more about
that one-way gate, the jewelled road tumbling towards

an amazing light and open arms. The second time
we talked one-to-one, was in winter, a cold, dead day

between Christmas and New Year. Kind friends
brightened the darkness with a party and games

but you, subdued, were not quite there –
told me it had been a dreadful year.

More and more, you said, you’d been in the cathedral
asking the questions it understands so well

but finding no answers. ‘A permanent solution
to a temporary problem,’ someone said, afterwards,

not seeing the solution’s already a given –
the dilemma’s not why, but how, what and when –

the why-nots of love, work and friends, irrelevant –
they’ll all soon be gone, in any case. Not a moment of madness –

you choreographed a small theatre of action – and then?
Was it a drop through cool dark to a nothingness of total peace?

Or did you spiral skyward past blossom and birds
to the embrace of a bride, and the blue of her miraculous eyes?