When living in Madrid between 1959 and 1960 on a postgraduate scholarship, Lyn Moir spent many sessions in the Prado, alone in the room with Las Meninas, before the crowds arrived. Some 45 years later, she felt impelled to write in the voices of the inhabitants of that painting, and when she discovered that in 1957, in his villa La Californie, Picasso had painted his variations on a theme, her cup was full. She entered their world … 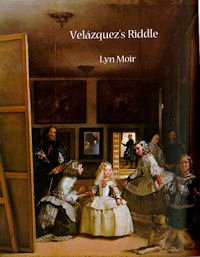 Paintings, assorted, on back wall, three,
in dark oak frames, plus one
in which, for reason unexplained, glass
either plain or mirrored, has been installed.
On right wall, four at least, not possible
to catalogue or mark in any way: side view
of necessity only shows frames.

Walls themselves in need
of fresh distemper. Ditto ceiling.
Strong evidence of stains. (Query cause:
fumes from charcoal in braseros?
simple breathing? turpentine?)

Item, living beings, humans, nine, one dog.
Five women: one faceless duenna
behind the luminous princess
flanked by protectors, ladies of the court
pendant on her every royal whim,
and the dwarf whose body,
achondroplastic, marks her as foil
for the iridescent beauty of the girl.
Four men: one in door, coming or going
or simply standing there; one anonymous
guardadamas, the only unknown in the pack;
one pituitary dwarf, delicate as a child;
the painter himself, towering above the rest.
The dog, honest, sound in temperament.

A looming figure, in whose hands
the whole illusion rests,
he lures us in, he pulls the strings
of those we see and those we must
conjecture. Ringmaster
with the power to position
unwitting performers at the point
of maximum tension,
he also is the star, the bill-topper
the hero of the hour who makes us gasp
at his audacity and skill
in wire-walking. He makes us feel that we
have some effect upon the scene,
that if we breathe too hard, too short,
we might disturb the balance of the court.

Veláquez, In His Painting Las Meninas, Observes Picasso
Painting It

He comes and goes, dressed
like a sailor, short, monkey-faced,
staring into this room
with obsidian eyes. He thinks
he’s a painter, carries a palette,
flashes the brushes, swears
in a comical mixture
of Castilian and French.

Does he spy for the Bourbons?
It’s a cunning disguise,
he’s bizarre in his manner
and a child in his art. Is he mad,
some poor bastard
let loose from the madhouse
as clown for the grandees
and others at court?

He’ll bear watching, whatever
he’s doing. The others don’t seem
to see him, as yet, save perhaps
for the dwarf. She’s a deep one,
too smart for those wittering girls
at the princess’s side, knows
the answers to questions
that haven’t been asked.

The Boy in Red – Picasso Gives a Young Dwarf a Life

The boy in red’s mysteriously acquired
an upright piano, ebony black:
candelabra, vase with roses, all the gear.
He plays honky-tonk, he plays jazz
in a bordello just down the road
from his regular job. He fears
recognition, so covers his face
with a mask. He wears gloves,
pounding the keys
with a passion he isn’t allowed
in the palace, sex out of his orbit,
forbidden to him and his kind.

Here in the half-light of illicit loving,
he plays his heart’s longing:
here he’s the heart of the scene,
the powerhouse engine
controlling the rhythms
of all of the players. Daylight
creeps in, revealing the grime.
The girls have gone home, the room
smells of sour Valdepeñas,
the dog rolls his eyes, the candles
are guttering. Nicolasito plays on.

That man, that manic clown, he’s painting pigeons!
He excuses himself, to be sure, with the claim
it’s the view from my windows. ¡Ojalá fuera!
If only it were – it’s a view calls to mind
my native Sevilla, or the coastline at Cádiz,
expanses of water and waving pine trees,
birds on the balcony, a fresh summer breeze
instead of this arid Castilian plain,
pine-cloaked Guadarrama range sawing the sky,
league after league of boulders and rock
weighing us down, we arse-lickers at court.

If there were a pigeon-loft around my windows,
one of two things: her highness would be cooing,
handling their feathers, laughing, smiling, playing
like a child in any village watching living creatures grow;
or, more sinister, more likely, the courtiers
would pluck them from their nesting boxes, eat them,
that is, if his good majesty had not had them first.
I fear a game bird’s life at Philip’s court is short.
Eat or be eaten, crawl and curry favour. Simple rules
to keep oneself alive in a world of fools.

Some mock my cousin’s vanity. They say
the cross of Santiago on his chest
was painted long before the king
had honoured him. Yet others claim
the royal hand inscribed the sign
after Diego’s death.

I do not know who put it there,
though modern tests have proved
the scarlet cipher’s in another hand
than his: the brushwork indicates
a different artist. If you press
me to name names, I must suspect
his son-in-law.

Eliminate the king. Our Philip is not known
for painterly pursuits. The hunt’s his sport,
for stag or wolf, or woman. Intellect
is not his thing: he reads the paperwork
of state, but literature? And art? Others
do that for his aggrandisement. Hard to compare
his pen-strokes with the swirling scarlet cross:
his written words are few. He signs decrees
with arrogant disdain, in sprawling script:
yo el rey.