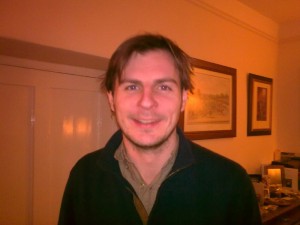 Born and raised in Beckenham, Matt Bryden is an EFL teacher whose work has taken him to Tuscany, the Czech Republic and Poland. His poems have appeared in Stand, Poetry Wales and The Warwick Review among others. His pamphlet Night Porter was one of the winners of the Templar Pamphlet and Collection Prize 2010. Boxing the Compass, his first full collection, follows in 2011, also with Templar. 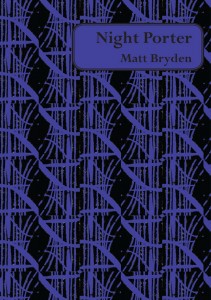 Stemming from Matt Bryden’s experience working in a Yorkshire hotel, Night Porter portrays life in the small hours among guests and staff, a life that steadily becomes more about witnessing the lives of others than the speaker’s own. With each new glimpse into the interrelationships at the hotel, the mood deepens with new emotional tensions and an overriding sense of alienation, and creates a compellingly layered portrait of ordinary lives.

I turn off the outside lights
and slip on Easy Classics,

roll circular tables –
wagon wheels at chin height –
into the dead hollow under the stairs.

I place the toast under the grill,
pour milk into a jug, slice grapefruit,
load the tray and balance its weight.

I prop the papers against the doors,
smell the cologne, hear the pour
of the showers.

Seven-fifteen, eight hours on,
I stand suitcases by the coach. The light
is thick as the smoke from burning leaves.

Three months in, I ask for some breakfast.

to the three Dutch girls
hovering down the road,
and I watch them pour
inside, hushed and uncertain.

One is blonder and taller
than the others. I recognise
them as housekeeping,
around seventeen.

I move them out of sight, into the bar.

I nod. I don’t know how to use the till,
or even the cost of drinks.
They hand me a grab of change.

In the half-light they sit and talk quietly.
The slight, brown-haired girl drinks a juice on her own.

‘Anne told me she checks all these cameras,’ I tell them.

They drink up. I see them out, watch
them cross the road.

I allowed the barman’s mopped floor
five more minutes to dry, let Lucy slip to the Ladies
to change into her jeans.

The chef bid me adieu
through his crash helmet, prime steak packed
under his leathers.

Then I bolted the doors and locked them out.

I walked along the racecourse
to reach the hotel. At times, it was illuminated
by funfair, circus tent, a dance
and dinner at the grandstand, but most often nothing.

The public could still graze animals, but
since foot and mouth the horses had gone –
sheep grazed too close.

Some mornings, wreaths lay covered in dew
or frozen to the steps where the gallows
had stood, the ink of the dedications rewet.

I crossed the road
and went up the rise.

Walking home, I passed the newsagent’s
before the paperboy could overtake me on his cycle.

I let myself in, filled the kettle,
closed the curtains, waited for post.

When I drew them, the lawn
could be damp with dawn or dusk.

Ascertaining which guests are in
and which to expect, their keys
hanging from hooks.

Checking the toilets, the back door,
patrolling the halls’ creaky landings,
looking down onto the lounge,

the armchairs
before the fire with ash
to be brushed off the arms.

Assessing the dining rooms –
glasses to be washed, cutlery laid,
food cleared from beneath tables.

Spelling the names of expected parties
on the board, in gold plastic letters.

The woman I showed around
a quick tour one Sunday
the Albemarle and Mural rooms.

The women I befriended
before overstepping the mark:
‘No, stay,’ I asked as they made to retire.

The woman I made laugh
after she asked me the size
of the sausage rolls.

The woman who asked for details
of the mural, then turned to her partner –
‘He doesn’t know.’

The tipsy woman – ‘Haven’t we met?’ –
who had interviewed me
for a librarianship the month before.

The ex-night porter from Chicago
who offered me drinks, saying,
‘I’ve been there, it’s a terrible job.’

The two men with a woman
who, as I complained about the noise,
beckoned me into their room.

Already, one of the boys has been to hospital,
a bag of sweet-corn from the kitchen
draped over his ankle.

A teacher assists him up the grand staircase
to his room and calls, ‘Lights out!’
I go to vacuum the conference room.

As I cross the lounge
a boy on the balcony freezes
as if caught in a searchlight.

The full hotel is like a dovecote –
cooing and adjusting and shuffling in the straw.
I feel the need to oversee my charges.

Glass shatters and the lawn is sprinkled
with yellow kernels. I take the stairs
to a doorway crammed with bodies.

Downstairs, the boy, bag of sweet-corn gone,
sits with his head in his hands
as the teacher phones his mother.