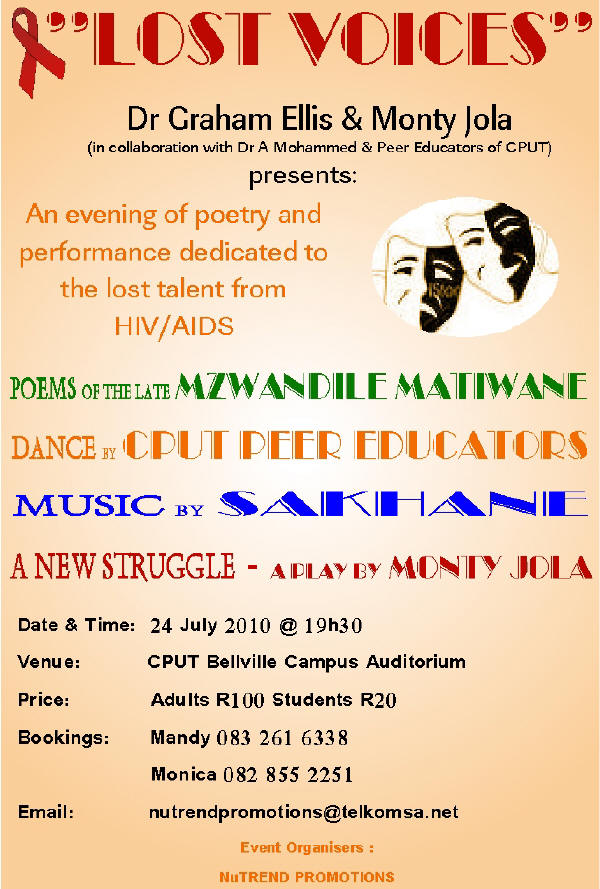 “Many have songs but are silenced before they can sing. Many of the voices lost to HIV/AIDS will never be heard. The talent lost cannot be calculated. Many of those who are lost never ‘hit the Big Time’. The language of their hearts never reached their lips. I don’t know how many or who they were.

Mzwandile Matiwane was one and I knew him briefly.

He wrote poetry while in St. Albans jail where he spent about 14 years. He told me that poetry saved his life there. In 2006 he sometimes appeared at ‘Off-The-Wall’ poetry evenings in Observatory, where he masqueraded as ‘the Hobo Poet’. In the harsh Cape winter of that year he lived under cardboard beneath a bridge near Cape Town Castle.

On one of my trips to drop him off at his ‘home’ he asked me to take care of some of his handwritten pages of poetry. The first page opened with a quote by Friedrich Nietzsche: ‘One always hears in the writings of a hermit something of the echo of the desert, something of the whisper and the shy vigilance of solitude’. His health deteriorated and in 2008 he moved back to his mother’s home in Port Elizabeth. He passed away shortly thereafter. In a phone call to him a few days before he died, he said: “It feels as if I am walking against the wind”.

Lost Voices is an attempt, not only to honour Mzwandile’s tragic life, but also the many unknown voices that we have lost to HIV/AIDS.

I have been joined in this project by the remarkable playwright and performer, Monty Jola.

Monty was Mzwandile’s friend and mentor. His acclaimed play, A New Struggle, will form the centrepiece of our short evening of poetry, music, dance and performance. Our collaboration became possible when we teamed up with Dr. Ashraf Mohammed and the Peer Group Educators of the HIV/AIDS Unit of Cape Peninsula University of Technology.

Proceeds from the evening will go to Mzwandile’s mother and to Monty Jola’s Township Theatre Performance Group.

We look forward to a memorable evening.

Thanks for your support!”