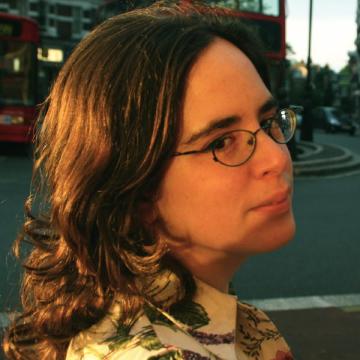 Sophie Mayer is the author of the poetry collections Her Various Scalpels (Shearsman), The Private Parts of Girls (Salt), and Kiss Off (Oystercatcher), with Lemniscate (Knives, Forks and Spoons) forthcoming. She teaches creative writing for universities and activist reading for English PEN, and is a regular film reviewer for Sight & Sound and The F-Word . Her latest project is I Don’t Call Myself a Poet, an online anthology of interviews with contemporary poets living and working in the UK and Ireland. 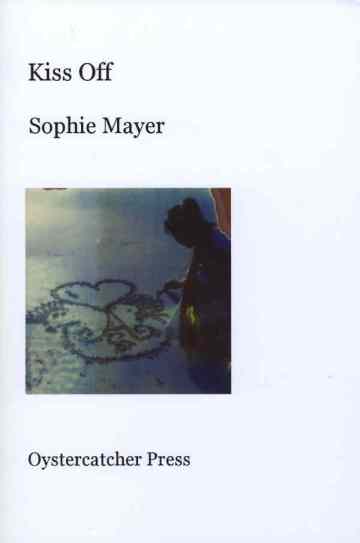 “Love letters across continents, eras and genders between Orlando (Woolf’s and Potter’s/Swinton’s) and Alex (protagonist of Lucia Puenzo’s film XXY, played by Inés Efron), with a twist of feminist theory and all the colours of evolution’s rainbow.”

“The words of the gurlesque luxuriate: they roll around in the sensual here while avoiding the sharpness of overt messages, preferring the curve of sly mockery to theory or revelation.”

“This is a beautifully orchestrated, bravura performance for mind and voice. Or, perhaps, minds and voices. For …  the writing reaches out through friends, texts and influences to the jostling realities of the contemporary world … the Acknowledgements section of Sophie Mayer’s pamphlet mentions Luce Irigaray, David Attenborough, Wikipedia and Joan Roughgarden. Oh, and it also names the friends who contributed to the project by responding to those very first tentative notes on Facebook.”


KO to your kisser, sister
lips meeting red leather
you better / go down
this is the kiss-
off blister (this
bliss this bliss too much
lip in all shades and flavours
chocolate ice cherry
pie berry burst fruit of the forest frost fairy
high / gloss
makes lips
stick / screw
courage to the speckled mirror
(they call me the kiss-mister
fogging up your silvered
your hornrims with my hot
breath in a blotted
lipprint lined
in pink no
mess no miss
no make
up in school yes
miss marked
my work with red-
inked kisses small
strawberries of errancy
truancy (run away
with me like a sadie
benning video like
a browneyed girl in the ring
and breaking free
of the wooden o
wouldn’t
oh
sign here for your
absence xo


A lipped kiss of crossed legs un
crossing. O, you think so do you
wear the pants she pants lips o
pen he writes see ho
wever you pitch it, pitch like a girl (high no
tes, glass rimmed with lip
stick tracery ornate as dynamite
criss-crossed for the takedown (the lo
vebomb wants us all in the o
of wound how juicy how moanumental

the ice breaks up and in
the cut she writes on the mirror over the fatal
washbasin no
pen eyeliner will have to do so
many things (kohl and response
able to lid or lip touching
brush pencil or liquid it will make you
a star
t as
tart a st.
art astarte

in a doublet and farthingale
in a black tux and nylons
in an island nightclub
in a shower a singlet
in the darkness
you are the darkness o
pacity, o paucity of your sync sound
I want to speak with the inside of yo
u

Sophie Mayer currently teaches Creative Writing at King’s College, London, and is the author of The Cinema of Sally Potter: A Politics of Love (Wallflower, 2009) and Her Various Scalpels (Shearsman, 2009). She won an Eric Gregory award in 2004, and is included in Andy Brown’s lyric anthology The Allotment (Stride, 2006) and in Carrie Etter’s Infinite Difference: Other Poetries by UK Women Poets (Shearsman, 2010). As well as writing regularly for Sight & Sound and Horizon Review, she blogs about books as deliriumslibrarian. She is a Contributing Editor at Hand+Star, and Commissioning Editor at Chroma.

The Private Parts of Girls (Salt, 2011) follows Alice down the rabbit hole, Kassandra onto Agamemnon’s boat, and Red Riding Hood into the forest: it conjures the most mysterious landscape of all, the mind of a girl – a girl who might be a dancer, a warrior-bride, a transatlantic traveller, the Messiah, sick of being compared to Sylvia Plath, airborne, born in space, or lost in a sunlit feld, discovering love. From Battlestar Galactica to The Clash, the poems mix tart, smart pop culture goodies into the dreamspace of fairy tales, as they take us on a journey – hallucinatory with culture lag – through the mind and body of a modern girl. This is poetry for Buffy fans (and Twilight haters), for readers who grew up with Angela Chase’s voice-over for their lives and Air’s soundtrack for The Virgin Suicides on their iPods, for everyone who ever wondered if Beauty secretly was the Beast.


“[Mayer’s] non-sequiteurs arrest you by their very strangeness, then draw you into a sensory chain where they seem just … true. Brilliantly disconcerting.”

“Full of zest, variety and intellectual ambition. There is no such thing as a typical Mayer poem, diversity being her great strength. Dazzling.”

Lysa has stars tattoed on her feet. Did it hurt, that
art made scintillant point by point. I don’t
ask. Flexing its paleness against red tiles,
her foot says ‘no.’ She’s a dancer, after all,
always has been: her feet are an earthquake-
buckled landscape — somewhere beyond
pain or trapped eternally within it. Pushing up
on bruised pad and ball, she perches between
the toast crumbs and the broken tap. A spring,
and those toes — étoiles — are pointing out
towards me. Black painted nails, cracked beneath
(I’ve heard the stories). The stars pulse over
roped veins, startling calluses like galaxies
formed from the dust of grinding the self
into grace. Into light. Over the doorway
of the main room, there’s a photo that I love:
half-naked against the lens, bride-tulled, pale
breasts a blur — meteoric streak of her slanted
through silver and emulsion. Falling hard
into the black holes of her eyes, I almost
don’t hear her graphic yes to my unasked. Of
course it hurt, and what hurts more: wearing ink
away beneath tap shoes and cowboy boots,
fading in sunlight from midnight to twilit
blue. Her feet ache with dawn, she says:
dew cold under her skin. Old bones turn out
fossils of past leaps, seamed with bright striations.
En pointe, arabesque. These carbonised remains
of what once took to the sky, one part
rock to one of fire, and fell to earth, blue into blue.

Careful now. All the knives must be aligned
or the city falls. Twitch and wake. Rain

arrives with dawn — season out of time,
no butterflies or moths. Squirrels hunt cats,

cats shelter with foxes. The girls lounge
in the fallen blossom of cigarette ash.

They are more beautiful than they can
imagine, and not only to the low-slung

driver thumping bass like a blood-thrum.
In the doppler of his wake, they roll

their skirts up higher, compete to see who hates
their legs most. At night, they twitch, restless

with nicotine and vague desire (indeterminacy
is its nature) (and its power). They want

the world, those girls, and stickily compete
to see who hates it most. That’s how bad

they want it, with its extinctions
and expulsions, evasions, invasions and

evaporations. With every crack
that doesn’t break their backs, luck flips

them past the row of knives, the low-slung
bass, the sullen sky. Newly-hatched,

like rain at dawn, they glisten cold.
Cold, and ashing into beauty.

Her dress is alight with
god particles
and gematria, her velvet is night;
her brilliance as impossible

as a talking cat. Her name
is Córdoba,
is heart-flowering jasmine
and the lovers celtic-knotted

beneath its fragrance. She is
berenjenas, honeyed
gazelle-golden plazas at prayer-time:
bimah and medina, heart centre.

In the guitar’s blue voice
she mourns
the grafted rose, the drying-up
of the courtyard’s fountain,

the closed gates of paradise; these
her poems,
woven in gold thread on scraps
of leather, inscribed (right to left)

on flyleavs, and worn around her neck:
gold coin
to buy her passage, a house-key
carried in the skin-fold of her generations.

On Being Dismissed as ‘Plathlike’

She rose at nine that December night; above the horizon I saw her come. She could shine yet with pale grandeur and steady might; but that star verged already on its judgement day.


She rises, at once inside and out, twig
fingers at the window; wraithlike,
she could haunt the moon. She is nothing,
and nothing is like

the breath that steams through
what is said of her — it flits, mothlike,
spectral. His words. Her words.
Annotations cross and writhe like

thrown punches. His hand. Her hand.
Nothing could be less lifelike
than this — this throwaway. This
trashing. It leads us false, a marshlight

wisp of a will not her own rewriting
her flight into myth. Like
the many she stands for, one more blonde
American. Stepford wifelike,

you domesticate her, canonised
and tamed so we cry for her strife like
she was directed by Sirk. Come,
critic, this is fat that your knife likes

to cut through. Cast aside. Who needs
fat? And so she is waiflike.
Her body, her work: hysteria,
anorexia. She eats herself. Like

it or not, that’s your thin
volume. Your scorn is like wrath, like
envy, perhaps. Perhaps
incomprehension. Or fear: stealthlike,

the ghosts you invoke will show
your thinness, waft like
breath through you. Discard you, a worn sheet.
And rise, then. Plathlike.

from The Private Parts of Girls (Salt Publishing, 2011).

Pre-order The Private Parts of Girls here or here.