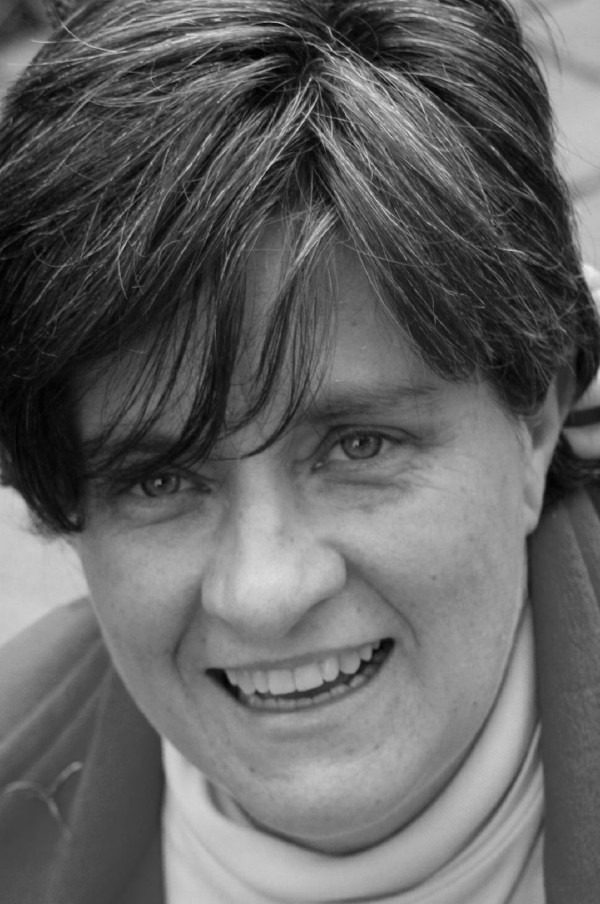 Colleen Higgs launched Modjaji Books, the first publishing house for southern African women writers, in 2007. Her first collection of poetry, Halfborn Woman, was published in 2004. She lives in Cape Town with her partner and her daughter. 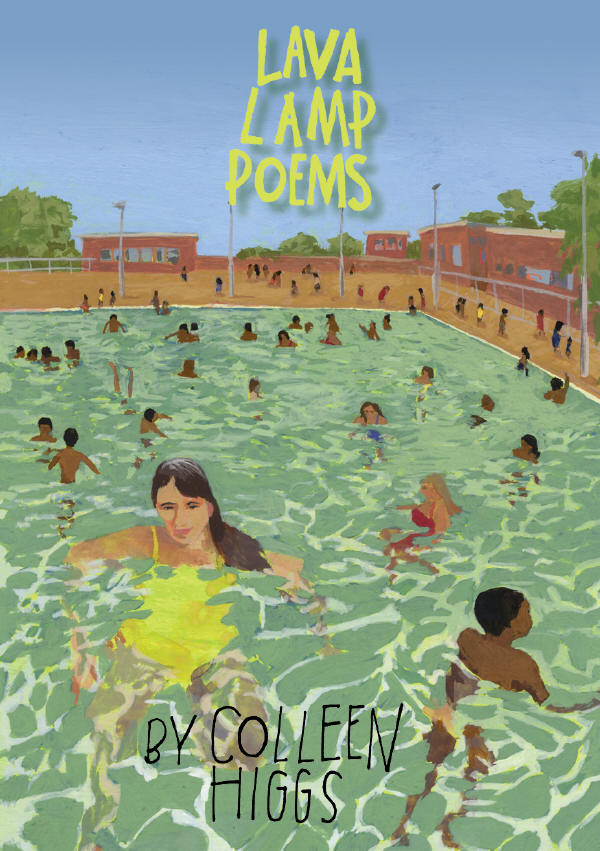 “The poems in Lava Lamp are compelling: at once conversational and uncanny. Colleen Higgs tells the truth but tells it slant, insisting on the singularity of everything that is familiar – domesticity, marriage, motherhood, family. The sequence of poems set in Johannesburg is captivating.”


“Alternating between the most economical of free verse and the most elastic of prose poetry, Higgs shows a dazzling facility with both mediums. Her poems reach into the past, isolating long-gone moments and imbue them with talismanic significance. Humour runs through the collection like a glowing thread – from the gentle and affectionate ‘an ode to Perry’ to the utterly female satire ‘on wanting a washing machine’ and ‘where these things lead’, to the dark undertones of ‘blaming Lulu’ and the bitter pill of ‘excuses’.”

“The poems mine the most personal territory, and there is considerable tenderness and vulnerability. In poem after poem there is a steely clarity, naming pain and fragile love without flinching, allowing the dark dimensions of people’s feelings to reveal themselves even while the hope and realisation of love is allowed to blossom. The consciousness of a mature artist is at work in all these poems.”

the comfort of parquet

I don’t miss those years of pert
jacket swinging hopefully down two flights of stairs
into the car headlights, streetlights, warm bars, sexy strangers
nor the flirting and longing and prowling ahead

I don’t miss the phonecalls, and the waiting and
arranging, and rearranging and driving, and analyzing
sifting, drifting, endlessness

I don’t miss waking up in men’s beds
men I hardly knew. Perhaps I miss
the way you could lean over and kiss someone
or touch him lightly on the thigh
Except, mostly I couldn’t
do it like that, wasn’t so cool, so nonchalant

Instead my mind raced, What will it
mean? Will he like it?
I couldn’t just be a young woman sipping
whisky in the gloominess of a jazz club
leaning over to the man she happens to be sitting next to
and kissing him because she wants to

I miss the Market Theatre, Jamesons, Kippies, Rumours, Scandalos
the Black Sun, film festivals, installations, walks in wet November
streets late at night. But not the too finely tuned
anxiety of all that was going on around
and within me – crushing, brutal, oppressive –
and didn’t seem about to end any time soon

All was taut, tense
Not sinuous, relaxed, sensual
except when waking alone and stumbling
from bed to bathroom in the sleepy coziness
of semi-wakened, semi-dreamwalking clarity
feet heavy on the parquet.

Where were you when you could play
freedom fighter, a dangerous game,
a particular way
of being worried about spies?
And who was really ANC and who wasn’t.

And we danced. The Lurchers. The Yeoville Rapist.
Weird and wild and strange. Sex, drugs.
Because I lived there it was wonderful,
and the library, Tandoor, the Harbour, Midnight Express
Elaines, Rumours, Mamas.
The park at night, the path, the plane trees
the police station. Yeoville Checkers.

Bigger and wider and smaller my world was then
realised how much and how many
were mostly Zulu speakers
and so many who didn’t speak any English. Only Serbian.
Any night of the week on Rockey Street
there wasn’t one uniform
if you liked, you could fit in.
You could go and experience something –
come in from the cold
from Alberton, Kempton Park.

By the mid 90s the banks started redlining
kickstarting slumlording.
You could hear buses changing gear
from the bedroom at Homelands.
One day the swimming pool opened to all.


On New Year’s Eve, a couple of years before the millennium
we stood on the balcony of your house in Troyeville
high in the dark sky, lights below
and distant fireworks, bangs like gunshots,
bursts of colour – shouting, hooting,
the air vibrating

We stood there, I’d made a decision
only later I’d feel the pain of.
That night on your balcony I was happy
the air was warm. I’d been to your hairdresser in Illovo
and paid more than I believed possible for a haircut

I felt sexy and courageous in my short hair
and my new life ahead. All of this was visible to me
as I stood there, free and full of possibility,
inviting the new to flow into the empty space I was clearing

I didn’t see the pools of tears, the anguish
at leaving the stone house, the white stinkwood trees
which had grown tall and shady in the five years I knew them.
I didn’t see the progressive rage
I would feel about a vacuum cleaner

I didn’t see how I would go beyond all of that
to where I truly wouldn’t care, wouldn’t mind
about the vacuum cleaner,
or the books,
or the trees

It’s not quite true that now I don’t care, don’t mind
in fact I am pleased that those things exist, that they are there,
and that they aren’t mine.

and there’s so much that you can’t ever see


Lava Lamp Poems will be available in better bookstores from the end of January 2011. You can order a copy from cdhiggs@gmail.com or through African Books Collective.

You are invited to come along to the launch of Lava Lamp Poems by Colleen Higgs. Finuala Dowling will introduce the poet and her work. There will be a short reading from the collection. 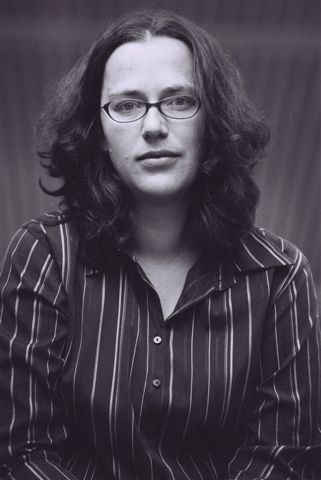 “At the root of Lucille Greeff’s best offerings lies an otherness of perception, an enchanting, quirky linguistic and imaginative bent, which vindicates the search by our publishers to develop new talent, and which is a delight to encounter. It is a search that does not shy away from what is endemic to South African experience but rather tries to retrieve it with love and care.

“Lucille Greeff offers a fresh, resounding voice with extraordinary perception and humour. Her poetry is uniquely bilingual; she seems equally and lyrically at ease in Afrikaans and English, making both languages sing.” 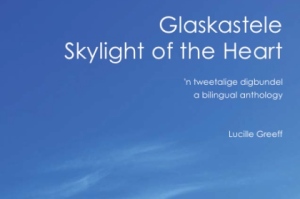 You are invited to the launch of Lucille Greeff’s debut poetry collection, Glaskastele / Skylight of the Heart.

Glaskastele / Skylight of the Heart is available online here and here and at selected independent bookstores in Cape Town.

perhaps they didn’t even know it
was done when it was done,
those alchemists,

maybe they didn’t even feel better
for a while, if at all
after all

ridicule, poverty, social ostracism
they weren’t worried about those they worried
about their work
not working their fear not resolving

what they knew: what they were
working on
their material, their metal, to make
come like the mysterious body

Read my interview with Joan on Litnet.

You are cordially invited to Burnt Offering’s launch – Joan will be reading – at the Cape Town Book Fair on 14 June 2009 from 17h30 to 18h30 at the DALRO Stage in the CTICC exhibition halls.