Roddy Lumsden is a Scottish poet, who was born in St Andrews. He has published six collections of poetry, a number of chapbooks and a collection of trivia, as well as editing a generational anthology of British and Irish poets of the 1990s and 2000s, Identity Parade. Terrific Melancholy is published by Bloodaxe Books. Roddy lives in London where he teaches for The Poetry School. He has done editing work on several prize-winning poetry collections and edited the Pilot series of chapbooks by poets under 30 for Tall Lighthouse. He is organiser and host of the monthly reading series BroadCast in London. In 2010, he was appointed as Commissioning Editor for Salt Publishing. 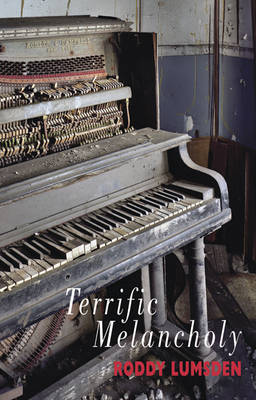 “Roddy Lumsden’s Terrific Melancholy is a book of changes, physical and emotional. It begins with a diverse sequence on that most dubious and folkloric of changes, rebirth into a new life, exploring our history’s advances – changeless, changeful. Meanwhile, in the lengthy title-poem, an actor’s reluctant crush on a younger colleague leads him to look back on life from middle age, while the poet himself does the same during travels in the USA.

Lumsden’s collection contains a miscellany of new poems which display the writer’s acclaimed inventiveness with form and structure and his breadth of approaches: satire, listing, praise poems and a new form, the ‘ripple poem’, which develops the use of ‘fuzzy’ rhyme.”

“There is a level of talent that will ransom any project in any school. On the one hand, it will be interesting to see where Lumsden goes next; on the other, he’s so good that it hardly matters”

“Although the verse is hopping with linguistic antics, the foci of the language are music and rhetoric and, whip-smart as these poems are, they tend to resist chin-stroking analysis … the rhymes, the larks, the brutal punch-lines tug Lumsden’s poems off the page and into the living context they describe”

We leave our blood in each hotel –
a blot of it enough to tally with
an honest deed, an inquest or a trial.

Reborn from an ear print on a bolster,
a heel scuff on a skirting board,
we cash ourselves in undercover,

turn ourselves in after we have left,
our leaving cited by a drying print
or stray thread picked off in the lift.

We leak and melt and peel, losses
compensated for, blood money
paid in notes to self, good guesses

made by golems, fetches, clones
who’ll stride on where we were,
their pockets hard with foreign coins.

Many go missing – but none are lost.
Misfortune knows that. Each bridge
should name the river it has crossed.

One bad thread and all comes loose. But never has.
And look, you’re wearing red on such a day, an XXL day,
your anklet tattoo a mistake, right there at the foot

of Christmas Steps, a place I’d never been but knew
in an instant, from a better life; they say these steps
have topped and tailed with Russian sailors, that

knifesmiths cutled and cranked in the backways, that
the lost choruses of carousers from the Bacchus
and nine more pubs rumped in the Bristol Blitz

still peal here and that, each dawn, a ghost kitten pegs –
and back again – four feet above the slabs. And this
the becoming season when need needs its acre, each

memory arriving more sinuous than the last (one bad
thread) and you already lost in one, impermanent,
inaccurate, in red, walked west toward the water.

What I say of my enemy: he couldn’t spot a pretty girl
on Park Street; what I say of my ally: he thrives
like wild violets thrive on There and Back Lane.

And if I wear a crown of wrong,
it will demand a brilliance of the song
you’ve known since birth and whistled all along.

Or if I wear a crown of wire,
it teases out your spasming desire
and tots how far you’ll spill your scam of fire.

And if I wear a crown of ice,
it will exact a tithing sacrifice
of onions, cream and apple flesh and rice.

Or if I wear a crown of sighs,
I’d summon pout and smudge of alibis
to prove a secret spoken is a lie.

Or if I wear a crown of lightning,
the light I would allow would be inviting
the ladderwork of rumour, clue and sighting.

And if I wear a crown of brine
bespeaking tack and brack, I’d tightly line
you up as saline, silt and serpentine.

So I will wear a crown of crowns
and promenade the borderlands and bounds
of my domains: sad aftermaths, slow towns.

Stranger than this? Arcana only: that which
happens only where the grand waves carry to,
where night falls quick as the warm rain
and life is guesswork, death mediocre to us
in lands we’d misspell, as far wars purr;
nothing that can be blown by the wind
is ever precise and our sightlines follow
this stream we drink from.
Make the sign
of an O and it might bespeak treachery,
might announce love. Arcana, knowing
what’s buried and where, the bushman’s
honour word, or deciphering the yawns
of the illuminati, by which they exchange
the acumen of the shared judiciaries.

That which lurks, fangtooth and coffinfish,
in the ink of the ocean; that which dallies
at the selvage of our apprehension, blinking
seldom, as the Titan arum lily blooms;
that which slurs below our understanding,
a minnow slowed in the ice, miracle secrets
rashing in minuscule lichen, hope asleep in
a kernel: far stranger than these is what we have,
o far stranger who knows me, colludes me.
We are not hopeless who do not know hope.

Reproduced with the permission of Bloodaxe Books.

Read more of Roddy’s poetry at the Poetry Foundation.