Pam Thompson’s first full collection, The Japan Quiz (Redbeck Press, 2008) includes a sequence of poems from the out-of-print pamphlet, Parting the Ghosts of Salt (Redbeck Press, 2000) which comprises a series of letters between a mother and daughter, both of whom are married to sumo-wrestlers. In 2005 Pam was one of the winners of the Poetry Business Poetry competition and her resulting pamphlet, Show Date and Time, was published in 2006. Other pamphlets are Spin (Waldean Press, 1999) and Hologram (Sunk-Island Publishing, 2008). Pam’s work has been successful in competitions and has been published in magazines such as The North, The Rialto, Smiths Knoll, Magma and Mslexia. She is one of the organisers of Word!, Leicester’s longest-running spoken word event and is an experienced freelance teacher of creative writing besides working as Senior Lecturer in Academic Professional Development at De Montfort University. 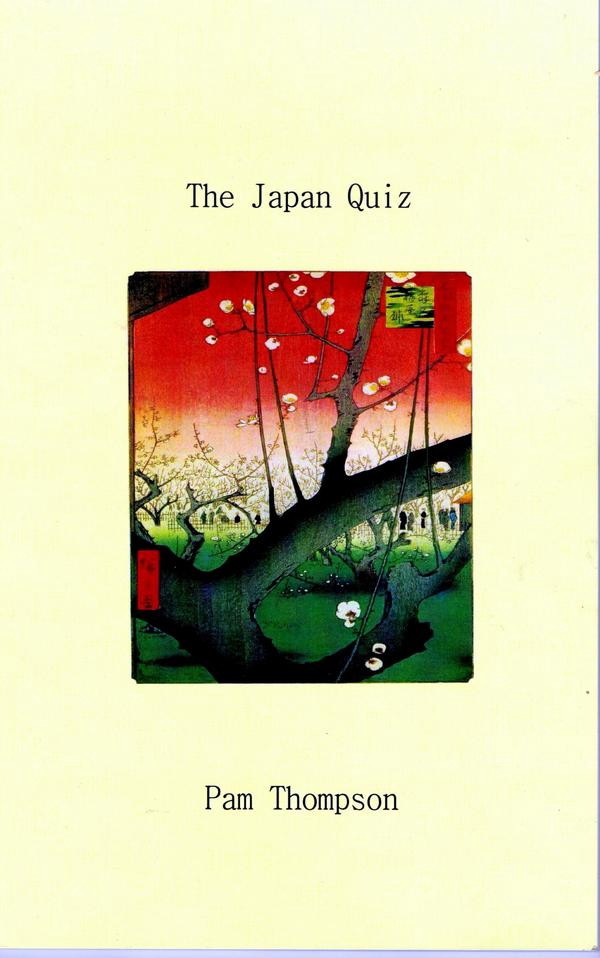 “Pam Thompson’s world is a compelling, understated, often sad, slightly surreal modern Britain, full of people celebrating Divali on the Belgrade Road, sitting in pubs “Way past Auld Lang Syne”, wearing hoodies, and George Best “booting the ball through the screen/ after scoring for the first time in colour”.

In ‘Night Interiors’, Santok (the man at the petrol station) displays Easter eggs and sorts out the flowers on display:

under blue strip lighting. Going and coming,
redoubled in the chestnut flank
of a customised Subaru,
he steps towards himself; breaks away …”

“There are twenty poems in this fine collection (Show Date and Time). Pam Thompson has a voice that should echo through our minds and should, through her skill, remind us ‘who we were’. It is a voice I look forward to hearing again and again.”

“Well-judged demotic language, particular imagery and an uncompromising focus on the emotional currents behind everyday events and thoughts give the poems in Show Date and Time a memorable immediacy and power. Pam Thompson’s voice can be both compassionate and tough, the world it describes vividly real, haunted by difficulties and pleasures.”

“Pam Thompson’s collection (The Japan Quiz) is bold and quirky consisting of five main sections that work to form intense, fascinating narratives. Many of the poems are arranged as longer sequences, a technique at which Thompson excels. The reader becomes deeply invested in the unfolding stories and desires of the characters contained within these. I enjoyed the collection immensely … There’s a great range to this work, and a sense of the celebration of language … Thompson’s characters impress. They are believable, seeming to lead real lives of work and desire beyond the pages of the book … The darkness appeals … and evoking darkness, both emotional and physical, is where Thompson’s strength really lies … that very notion of a ‘thin skin’ between two worlds. Thompson’s words are at their most powerful where she considers the intersections, the tensions, the matches and mismatches between differing worlds: cultural, emotional and psychological. In doing so she reveals their lightness but their compelling sense of darkness too. This book is a trick and a treat, I recommend it.”

That my good reputation
Be lost, is nothing –
But that surely, without it
You’d not love me anymore.


Sleek as rosewood, a buddah,
he folds his arms,
the stitches on his sash blow kisses.

Be proud, he says, this samurai,
and spins, unwinds,
my wraps as fine as gold leaf fly,

spins me like a dancer, shedding fire
until dizzy, unwound, exposed,
I am a white grub whose wings beat wild
through skin. My heart is sealed,
a trapped flame leaping
in its casket for my oyakata.*

If he is rough, it is his custom,
he knows no better,
his clumsiness moves me,
his noble weight,
the terracotta perfume of his skin.

This is not a night of silence,
A night of no moon,
our cries could tear down the stars,
drown the cicadas’ envious song

and as I ride, feel his body surge
faster, faster, I am galloping back
through history, am the lady
of the water-lilies hitching up her skirts
for an octopus, not the lesser joys
of a man’s embrace.

He slips a towel around my waist,
A harness, to stop me falling, you understand.

I want to sit on a canal bank
but nowhere near those fishermen
and their triumphal arch of rods;
their stinking jars of maggots;
their cans of Long-Life.

Before a fish is dangled
like a dark dripping slipper,
I want to be away at the next lock,
helping a pleasant elderly couple
prise the gates apart

then with them, pass, oh so slowly,
through the tidy, lovely water,
upping the engine’s disruptive growl
so that the winning bite
sashays downstream

and the maggot on each line’s untasted
though the pool we leave behind
will be stared at, sifted,
long after the women at home
have packed up and moved on.

It’s entirely Zen, this waiting. It’s the quality
of waiting that counts in the end,
to tame the monkey mind,
the human tendency to shake, to twitch.
The synaptic response to a flicker of wind
on a line, the mock bite of weed, tease
of a current.

Let your mind flow and flower
like the hawthorn blossom on the bank.
He who waits will be rewarded.

People on narrow boats call:
Caught any yet? or What’s the point?
You’ll explain yet again that the point
isn’t in what’s pulled out
but in what’s thrown back.

You’re reassured when your neighbour
a few feet away does exactly the same as you.
And the light fades. And the midges
dance stir crazy across the skin of things.
You want to feel it one more time.
You can’t even see the end of your line.
You suspect this is the nearest you’ll ever get to love.


Waiting for the Bulls

The first comes tamely like a saint.
His eyes are calm. His fur is white

as sanctity. He licks my palm and a faint
sound of birdsong, a smell of earth, rises

from where his hooves have been. Gentle.
Not like the second. His horns have a scythe’s

curl. When he stamps and snorts the land
buckles, olive groves burn. Tell

me, I entreat, of your pain. But there
is no reason in him. The third walks

like a dancer, is womanly yet
his man’s heart is visible like a lit-up globe.
The last is a typical bull. He dies at my feet.

Order The Japan Quiz from Pam at pamthompson240@yahoo.co.uk.