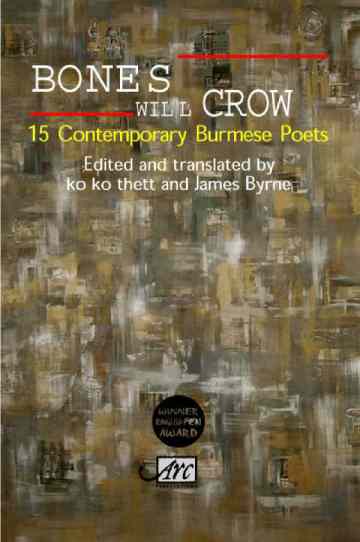 Introduced by Zeyar Lynn with a Foreword by Ruth Padel

“This is the first anthology of contemporary Burmese poets published in the West, and includes the work of Burmese poets who have been in exile and in prison. The poems include global references from a culture in which foreign books and the internet are regarded with suspicion and where censorship is an industry. The poets have been ingenious in their use of metaphor to escape surveillance and censorship, writing post-modern, avant-garde, performance and online poetries.

The anthology reveals the transition of traditional to modernist poetry, the development of Burmese poetry over the second half of the 20th century, as Burma has changed. Through their wildly divergent styles, these poems delight in the freedom to experiment with poetic tradition.”


Wherever he goes, in his sling bag
He carries his severed leg. If he has to shake hands,
He takes his severed leg out from the bag,
And touches it on the other person’s hand
As he says ‘Nice to meet you’
He must have gone through a lot of suffering
With that severed leg in his bag,
Though he still has his two legs intact.
When he needs reassurance, he’ll insert his right hand,
Like a dead hand, into the bag slung on his right shoulder,
To feel the sinews and greasy slime of the severed leg.
That’s how he recharges himself.
That’s how his pride is uplifted; his self-confidence restored.
The severed leg serves as his pillow when he sleeps.
The severed leg is placed on the dining table when he eats.
(Is he married? Let’s say he is.)
When he makes love to his wife,
The severed leg welds their two bodies together.
(Only then does he feel the hit, he says.)
The severed leg is his life, his past, his present and
His future, he says. ‘It’s truth’, he says.
‘It’s honesty’, he says.
‘It’s just him’, (says someone else).
Someone who claims to be a childhood friend.
He too always carries a sling bag.


in a not-so-new morning
vivified
in sunshine

what a gusty wind

the person who discovered fire happened to be me

At a certain café in New York City
If you happen to leaf through this page
The poem is dedicated to you,
Bold Rose, swelling with petals.

I have often taken
a stroll
On your burgundy lips
The humid breeze
Between
Your tongue
Your teeth
How can I forget
The scent of grapes it carried.

As I combed your drenched hair
You laced up my jungle boots.
Shall we call it a predestined meeting
Between water drops of life?
Many wrongs have since occurred.

Columbus!
Mr. Columbus!
I couldn’t have predicted her plight
How my Rose walked the American plank.

Will your itch be relieved
In the land of cowboys
Riding the world like a horse?
Will you be gazing
At the image
Of a sensitive boy
From a whisky glass?
What will you be doing
During the American holidays?
How will be greet
One another
Whenever we meet?

From beneath the tragacanth tree
My soul, like the feather of a paddy bird, is marching
Towards the native land of the Apaches
Towards the Wild West, wherever you are.