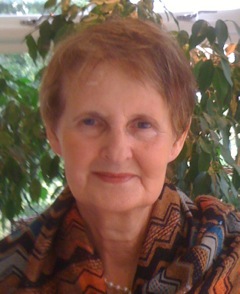 Valerie Morton returned to poetry after a long break and in the last ten years her poetry has been published in various magazines. She was runner up in the 2011 Essex Poetry Festival. In 2012 she won first prize in the Ver Poets Ten Liner competition. She has appeared online in Ink, Sweat and Tears and The Poetry Shed. In 2011 she completed an OU degree which included Creative Writing, and since then has run a Creative Writing Group with a local mental health charity. She is a member of Ver Poets and her poems have also appeared in three anthologies to raise funds for charity. Mango Tree (Indigo Dreams Publishing, 2013) is her first collection.

“The inspiration for this short collection is one man and one country. Written through the eyes of a young Englishwoman travelling to India for the first time in 1967, these are unashamedly intimate memories, helped by diaries and letters, of the vibrancy, mystery and cruelty of a country where waking up each morning is an epiphany.”


“These poems are at once subtle and evocative, delicately poised between personal and universal in a way that only good poetry can be.”

“We walk with Valerie into an unknown, wondrous place, where we are invited to stroke the skin of India, read it with our fingertips, hold it in the palm of our hands.”

“Enigmatic and intoxicating, Valerie Morton’s India is steeped in contrasts, ‘a palette that turns cities pink, temples gold/ and throws shadows longer than the night’. In poems of displacement, discovery, apprehension and enchantment, she weaves memories of enduring love. Mango Tree is a poignant tribute and a sensory delight.”

You gave me India


spread it out before me
in the clashing colours of sarees
drying on the banks of the Ganges –
a chaotic palette of lights
and darks – a palette
that renews itself each morning
out of noise and disarray,
blistering heat and boisterous rain –

a palette that turns cities pink, temples gold,
and throws shadows longer than the night.


The waking city bursts into a circus
daring acrobats on a river of bicycles.

too bright to imagine. We brush past bullock carts
that trundle as if history has forgotten them.

Close your eyes – your voice is gentle,
but limbless beggars are already remembered.

half a world away. You speak names:
The Red Fort, India Gate, Connaught Place

but in the taxi I sit trim as an English lawn
while horns give way to a tree-lined road.

There are dhobis ironing in the shade and a man
leading a bear with a ring through its nose.

I try to tell you, but you are talking to the driver
in a language I can’t understand.


She lies in the gutter among rubbish, pushed
that way by hurrying feet. One small hand pokes

from under filth – a perfect hand with finger nails,
a hand I want to take in mine, but you pull me away –

away from flies that feed on her.
I can’t go back to cover her, to protect her

nakedness from casual glances.
You say there’s no room for sentiment

and I don’t know you – a Pied Piper
who leads me through a gaudy market,


I wander through a day of strange sounds –
locked out by my own voice.

Relatives come, curious about the woman
who’s crashed into their lives.

Hindi voices rise, then lower as I pass.

I stray outside to the letter box,
hoping to find that familiar aerogramme.

I trace my fingers over English names
in the telephone directory

for any flimsy connection.


After a steamy, sleepless night
I watch him from the balcony,
an old man bent
under a heavy shawl.

Until now he’s been the tap tap
of his stick, the puff
of his whistle;
the unexpected comfort
of knowing he’s there.

He doesn’t look up,
but fades into the morning
calling
Subha kucha thikka hai
“All is well”.

in a line of sparkling white,
of smiles and namastes.

then run away. No-one comes behind
but still I stand and wait

in the dry soil.


Goodbye is strange – no words –
just my eyes glued to yours
over a sea of well-wishers.

to leave the rains that quench the dust
or the peacocks that strut
their ritual dance in fast-falling dusk.

Instead I take with me the scent
of dung fires, sandalwood
and rose-red cities in a suitcase

heavy with departure. I put on
my homebound face and shrink
into the bustle of Palam Airport

clutching a ticket that says Return.
I know it will be raining in London.