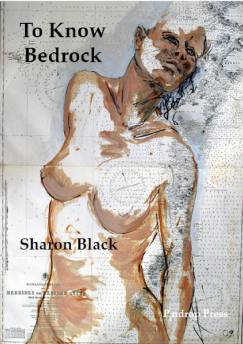 Sharon Black is originally from Glasgow but now lives in the Cévennes mountains of southern France. In her former life she was a journalist; in her current one she runs a holiday retreat and organizes courses that include creative writing. After studying French at Aberdeen University, she taught English in Japan. Lesser but equally entertaining jobs have included being a Pizza Hut waitress, cinema usherette, shop assistant, au-pair, interpreter, language tutor and pressing fliers for dodgy Spanish timeshares onto British tourists. Her poems have been widely published and won many prizes and are collected together for the first time in To Know Bedrock (Pindrop Press,2011).

“Sharon Black’s poems are meditations on memory and family, on the way the present triggers images of the past. But they are also gentle explorations of the skin and bone of bodies, and the oddities of landscape, deft and highly tactile: a series of deceptively quiet lullabies to the inner and outer world. Hidden among the gentle, teasing and tender images – of love, of birth, of dying – there are also suddenly disturbing moments, as in a poem about a terrorist bomber, which make the reader want to go back and search the poems for the little inklings of pain as well as the sensory delights. This is a really absorbing and pleasurable first collection, with a constant enjoyment of the individual power of words.”

“Whether she’s writing of birth (real or metaphorical), of love or of journeys, Sharon’s voice is an original one: tender, tough, imaginative. She doesn’t flinch from the harsher aspects of being alive: the unborn child, breast cancer and loss all figure in her work. Here too are passionate, visceral poems that hold together both love and death. Many of her poems are rooted in her native Scotland, with the Hebrides a recurring motif. There’s a mysterious Other in some of her work – one perhaps of and in the land, perhaps beyond it. Her work might be that elusive treasure brought to the surface in the ‘net of the moon’ trawling ‘the sea of the night’.”


She spends her days
in their flat above The Gala
listening for his tread,
pacing the worn Kashmiri carpet,
twisting the gold band
round her finger.

It circles her henna-painted skin,
the red knuckle
of a life led in-waiting;
it circles her flesh
like a hawk, like a dog
chasing its tail,

like the hands of the clock
above her kitchen sink,
like the moon, Chandra,
that keeps its distance
while roulette balls below her feet
narrow their target

in ever-decreasing circles
and everyone stands
an equal chance.


Six months in Scotland and her sari’s lost
its scorched scent of spices:

plumes of cumin-tinged smoke
rising from the chapattis spun thin
by crouching women.

The coloured silks brushing her ankles
are rain-smeared, grey

She’s fading from the outside in.


She struggles to understand
the man behind glass
pushing the parcel back to her.
His words rush like a monsoon through slums,
churning silt and mud
until she feels she’s drowning.

Please, madad karo, she says,
the phrase trickling over her lip
like the holy water at Tungnath temple.

But he doesn’t help –
waves her on, shaking his head
as another customer pushes past.
A poster of stamps reads
Birds of the World,
each depicting outstretched wings –

she thinks of ioras swooping and diving
above her village shrine where she used to lay
sweetened laddu, rose petals.